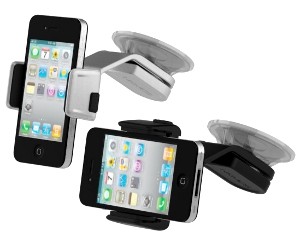 A Brisbane-based entrepreneur is gunning for a breakthrough in the US market after raising more than $40,000 via Kickstarter for his invention – a new type of iPhone holder for use in vehicles.

Nik Conomos’ invention, Ultima, was conceived two years ago and has been developed with the help of a Brisbane design company.

Conomos, who is a professional singer, is aiming to gain a foothold in the US market by using crowdfunding site Kickstarter to raise the funds for manufacture.

With five days to go, the in-car mount has comfortably beaten its funding target of $10,000, with Conomos hoping he will hit the $60,000 mark.

He says he came up with the idea for a new type of holder after becoming disillusioned by the other products on the market.

“I made my own prototype, which was good, but only held one type of phone,” he says.

“I took the idea to a design firm who have helped adapt it.”

“The main difference to other holders is that it is made of aluminium, while almost all the others are made of plastic, which starts warping after a while.”

“Other holders don’t look great, but this one really complements the interior of a car. The suction cup we use is also a bit larger than most holders and the locking mechanism is different – it has a clamping system that won’t move unless you press the release button.”

“From feedback, the failure in the clamping was the number one issue in other holders. So I really wanted to make something that was very strong and durable.”

Conomos says that an initial manufacture order of 1,000 holders will be used to repay backers of his project, with others to be sold online.

The budding entrepreneur is in talks with a US manufacturer, with the aim of getting the product listed in major American retail outlets.

“I have high hopes of getting listed by retailers in the US – we have already had interest from resellers via Kickstarter.”