From the land to online: Beef producer embraces the internet for sales 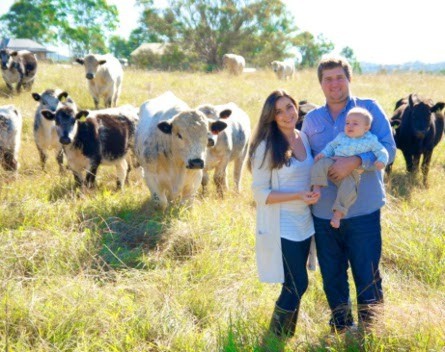 Producing beef and online retail may not sound like obvious bedfellows, but NSW farmer Shaun Grimston is bringing the two together.

“I just love the internet to be honest,” Grimston told StartupSmart. “It gives us a wider reach and is cheaper than bricks and mortar.”

He says they were butchering and selling their product to friends and family until demand became too much.

But instead of opening a butcher shop, they turned to the internet with butcherdirect.com.au.

“We’re trying to be your local butcher, but online,” he says.

Grimston has been growing beef at his Orangeville property on the outskirts of Sydney for 10 years and has seen demand steadily grow.

Online orders are delivered to customers’ doors within 48 hours by refrigerated vans.

Grimston says establishing a presence on the internet has been a learning experience.

He says at first they put up a “brochure” website which didn’t work because they couldn’t collect payments.

They then engaged a website development company which “didn’t go to plan”.

He says a lot of promises were made but the outcomes weren’t what they expected.

“I guess we’re a hard customer because we want everything to be perfect,” Grimston says, adding they’ve since directly hired a website developer.

“I think we’re leading the way with online meat ordering.”

He says he’s up every night talking to the developer about changing things on the website to improve it.

Grimston urges anyone else considering branching out online to look at a broad cross section of websites for ideas and not just those that operate in your particular field.

“That’s how we’ve learned,” he says, noting they’ve added a “chat” feature to engage with customers.

The moves appear to be paying off with revenue doubling between November and December.