Can Google convince us that an oversized golf cart is the car of the future? 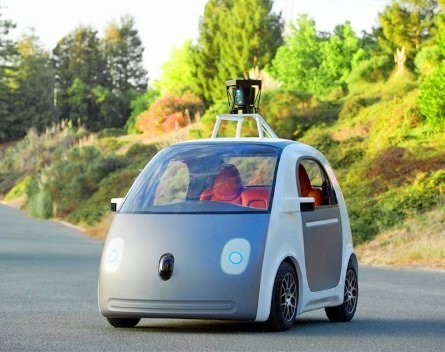 Google have recently shown us a car of sorts. The self-driving Google Car is the internet giant’s latest foray into physical products.

Visually it’s a cute cross between a golf cart and a Japanese anime character, with an obvious ‘face’ and round, soft features that exude friendliness and care. However, ideologically the driverless vehicle is more akin to an escalator than a car.

Interestingly, in developing a car that doesn’t need a driver, Google are venturing into completely virgin territory and as a result they have exaggerated the friendliness of the product to make it appealing to the public. The Google Car’s cuddly aesthetic is designed deliberately as a counterpoint to the abject fear most people would have in handing over control of their car to a computer.

The Google Car does contain amazing technology, even at a prototype level. The autonomous, self-learning vehicle has sensors that can remove blind spots by detecting multiple distinct objects simultaneously in all directions for hundreds of metres and hopefully react safely. Sound impossible? So did the iPod before Steve Jobs and Jony Ive put their minds to it.

Watching the publicity video clearly illustrates Google’s ideas on the target demographic, with older people, the blind and children the focus. At least initially, they seem to see the car as a device for people who can’t drive or don’t want to. Unsurprisingly, everyone appears to be having a ridiculous amount of fun.

Like all designers of products that create a paradigm shift, Google’s team needs to answer questions that others haven’t tackled before. Who would use it, how and why? Can current technology deliver a suitable solution? How much actual driver control should be relinquished? In discussing the Google Car in our studio, debate raged about what would happen in a crowded street. How would the Google Car react to a random mistake by another driver or pedestrian? These are the unknowns that still need to be worked through.

Therein lies the most important aspect of this project. The Google Car is a big innovation, but it really is only the first foray into the unknown. This prototype will challenge what we think and allow people to test the technology in the semi-real world. No doubt it will fail some tests, but it’s sure to provide insights that we don’t expect, and lead to innovations that most can’t imagine right now.

Like Apple and Nike before them, Google is applying their massive resources to looking outside their comfort zone for bigger opportunities. In doing so, they are risking failure and ridicule (look no further than the backlash against Google Glass), but they also open the opportunity for enormous rewards as the first into a new market.

Perhaps the biggest hurdle to acceptance of the Google Car may not be confidence in the technology, but people’s love affair with the glamour of a fast car. The ability to be reckless, to feel the power of the engine or to show off to your peers may still be that intangible desire that an oversized golf cart could never deliver.

Although many will scoff at the idea of a self-driving car, pointing to countless issues and dangers with the concept, the fact is that it seems almost inevitable in some form or other. If we look to science fiction we could expect these types of vehicles to be very much part of our lives sooner than we imagine.

In the words of the great Henry Ford, “If I’d asked people what they wanted, they would’ve said a faster horse.” Perhaps the Google Car represents the first small step towards one of the biggest changes to our society since the internet was invented.