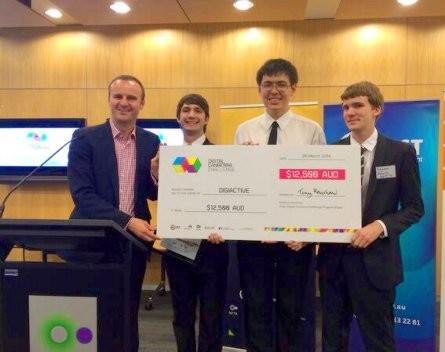 You don’t often hear the words ‘government’ and ‘innovation’ used in the same sentence without irony or a good dose of scepticism, but a new ACT government initiative could prove the exception.

The Digital Canberra Challenge is an ACT government initiative managed by the eGov Cluster NICTA, with partners including the Canberra Business Council and CollabIT.

The winner of the challenge was announced on Wednesday, with DigitACTive taking out the top prize. Its prototype delivered a solution that reduces red tape for event organisers in Canberra to acquire permits from ACT government agencies.

It’s hoped that efficient event approvals are just one way Canberra can open the door to enriching its vibrant cultural life.

Manager of NICTA’s eGov Cluster, Michael Phillips, says the competition is unique in that it is not trying to create the next killer app, but rather couple innovators with government challenges that need solutions.

“The situation up until now has been that people working in IT land up in public service jobs, but we’re offering an opportunity to foster their entrepreneurial spirit,” Phillips says.

The competition has a unique approach to sourcing challenges with the first step in the process an open call for government departments to identify business challenges. Phillips is quick to point out that the callout for ideas is free from any bureaucratic process and they encourage as many ideas as possible.

From there the ideas are whittled down to two and opened up to innovators to pitch concepts around possible solutions. Once submissions have been made two teams are chosen, one for each solution, and work to complete a prototype over a four month period. The best out of the two innovators wins the main prize.

Thirty business challenges were registered with 12 submissions from innovators.

Phillips says the challenge proved so successful that tweaks to the procurement policy were being made so that innovator teams can still work on the project on a commercial basis of up to $200,000.

The challenge will be run twice a year, with funding approval for $100,000 for three years. Innovators applying for the challenge need to be ACT-based and have fewer than 20 staff.

Phillips notes that the Canberra startup scene is booming, evidenced by the launch of a new accelorator at ANU.