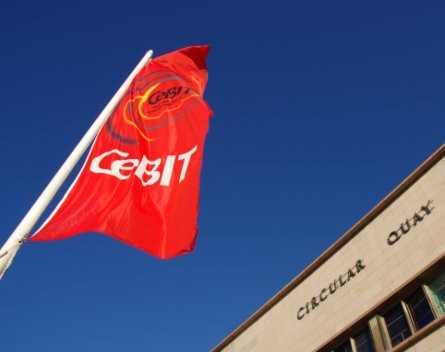 CeBIT Australia, billed as our biggest tech conference, opened its doors on Monday at its new Olympic Park, Sydney, location with mixed reviews.

It seems that its special train service to the venue ended at 9.41am, with only three trains in the morning and another three in the afternoon, a source of contention for BRW deputy editor Caitlin Fitzsimmons who tweeted that she wouldn’t be back if the conference was held there again next year.

Finally reached my destination at #cebitaus. I won’t come back to Olympic Park if it is here next year.

Fitzsimmons also alluded to low numbers, but all were not in agreement.

@CeBITAus vibe great so far – massive turnout which I was thrilled to see being at this new space. Congratulations! #CeBITAus

There were about 100 startups as part of a concerted effort by the organisers to attract more to the event. A Startup Alley was erected with one attendee saying, ”It feels like ‘Startup Alley’ was a good way to fill up dead conference space, but it does feel like SXSW trade show… With less booze!”

They also noted that CeBit was good for startups who can sell to B2B, but less appropriate for people who sell direct to consumers. There were the usual event complaints around logistics like Wi-Fi, but when you’re a tech conference your audience can be less forgiving of these things.

With recommendations by the Commission of Audit to cut federal funding for startups fresh in the minds of many, New South Wales Deputy Premier Andrew Stoner called on the federal government to support the industry. Speaking at CeBit, Stoner had some advice for Treasurer Joe Hockey: “No new taxes, back our innovative startups in the digital area.”

“An ecosystem based on innovation and new technologies has the potential to raise GDP by $37 billion by 2024,” Stoner said. Here are some of the Twitter highlights (those that weren’t tweets asking everyone to “visit us at

Cebit 2014 is truly international. I am loving all the different languages around the world under 1 roof #cebit2014 pic.twitter.com/D16K0z6PXc

Hope all the startups are killing it in the #CeBit exhibition hall, shame it overlapped with #StartupAsia conference dates.

And of course there were the few #cebitselfies: