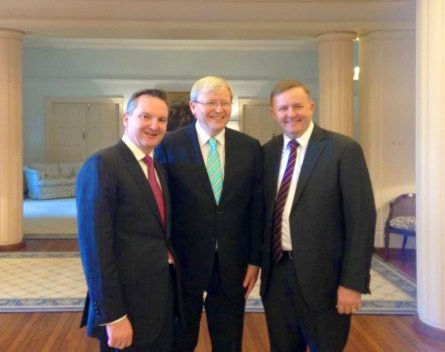 The government has unveiled a pre-election economic statement that downgrades growth and revenue forecasts and resumes cutting spending in an effort to meet Labor’s commitment to return to surplus in 2015-16.

The statement anticipates a further downgrade in revenue of $33.3 billion  over forward estimates, driven by a significantly softer economy. Unemployment is expected to peak at 6.25% this financial year and next, 0.5 points higher than forecast in the May budget. Inflation is likely to be slightly higher this year but a little lower next, and GDP is expected to be softer, at just 2.5% in 2013-14, rather than 2.75%, taking growth well below trend. However, the biggest change from the budget point of view is a dramatic downward revision of nominal GDP growth, from 5% in the budget to 3.75% this year and from 5% to 4.5% in 2014-15.

To offset the revenue falls, the government has announced $17.4 billion in spending cuts and tax rises, but only to apply from 2015-16 onward, preferring to let revenue write-downs flow through without commensurate savings this year and 2014-15. As a result, the expected budget deficit for this year —   mooted as late as December to be in surplus — has blown out to $30.1 billion. The deficit for 2012-13 will come in at $18.8 billion, a little better than forecast. However, the return to surplus has been delayed a further year, to 2016-17, with a $4.7 billion deficit now expected in 2015-16.

The key savings and tax increases are:

The government has also left itself a modest election warchest of around $1 billion in measures not yet announced, albeit with some large savings yet to be revealed.

The government has also unveiled the cost of its “PNG Solution”, expected to cost $632 million over four years, including  nearly $200 million in capital to expand Manus Island. In addition, PNG will also receive an additional $420 million in aid over four years, primarily in health, law and order and education.

This story first appeared on Crikey.com.au.