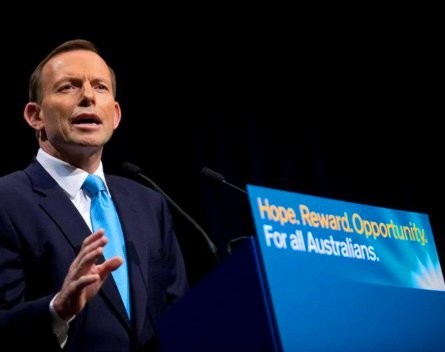 The Coalition has won the 2013 Federal Election, meaning opposition leader Tony Abbott will be sworn in as prime minister within the coming days.

It is expected the Liberal and National parties will secure 91 seats in the 150-seat House of Representatives, well over the 76 needed for a majority. Labor is forecast to win 51 seats.

In a brief victory speech delivered at 10.20pm EST, Tony Abbott said he pledged himself to the service of the country.

“Today, hundreds of thousands of people would have voted for the Liberal and National parties for the first time in their lives. I give you this assurance: we will not let you down.

“A good government is one that governs for all Australians, including those that did not vote for it.

“In three years’ time the carbon tax will be gone, the boats will be stopped, the budget will be on track for a believable surplus and the roads of the 21st century will finally be well underway.

In his concession speech, Kevin Rudd said he would not contest the Labor party leadership, leaving an open field after the election.

“Therese and I wish [Tony Abbott], Margie and their family well in coping with the stresses and strains of high office that lie ahead. We know a little bit of what that is like,” Rudd said. “I also wish his government well for the great and difficult challenges that lie ahead.”

“I know that Labor hearts are heavy across the nation tonight, and as your prime minister and as your leader of the great Australian Labor Party, I accept responsibility. I gave it my all, but it was not enough for us to win.”

“For our party and for our movement, we have known defeat before, but I say this to you: throughout out 122 year history, we have always, always risen from defeat. And we’ll do it again.

While postal votes have yet to be counted, early figures from the Australian Electoral Commission showed the Coalition gained 53.5% of the two-party preferred vote, while Labor’s vote declined to 46.5%.

The Coalition has gained clear majorities in New South Wales, Victoria, Queensland, and Tasmania, while the ACT went 60-40 to the Labor party.

In time zones behind the Eastern states, such as Western Australia and South Australia, too few votes have been counted to give a state-wide two-party figure.

Coalition industry, innovation and science spokeswoman Sophie Mirabella is battling to retain her Victorian seat of Indi against independent Cathy McGowan, who has polled strongly.