“Connecting flying robots to what we do every day”: Drone developer wants to make Australia a little more like The Jetsons 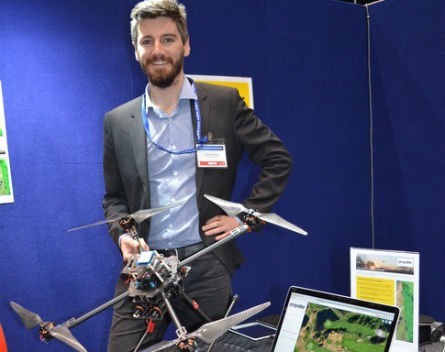 The cofounder of a Sydney-based drone aircraft and cloud platform developer says it has the potential to make internet-connected drones a part of everyday life, making Australia a little more like The Jetsons.

The comments  were made at an Internet of Things event in Melbourne, attended by Private Media and organised by network equipment giant Cisco.

Propeller Aerobotics cofounder Francis Vierboom says it is now possible and affordable to create drones that will fly themselves about and capture a lot of different data from a lot of different angles, and feed that information into the cloud.

“Thinking about what the internet of everything means from our perspective with the naive, exciting opportunities, I think is about making the world a little more like The Jetsons,” Vierboom says.

“The internet has so far been mostly about desk jobs, except recently it has gotten a little more interesting because we’ve gotten to do things on our mobile phones and watches, but there’s still a lot of staring at a screen.

According to Vierboom, there are a number of industries ready for disruption by a combination of drone aircraft as part of the Internet of Things, as well as cloud-based data storage and analytics.

“A lot of businesses see the potential for drones to change the way they do things. There’s a lot of existing applications that are already being disrupted by these machines,” Vierboom says.

“So for example, surveys, where you can measure the exact shape and contours of a piece of land or work out exactly how much iron ore is in each of the open cut mine. Drones are changing how that’s done and they can get it done really quickly.

“I’ve been working on drones for a long time, and as soon as you tell people that, they spend the next 10 minutes talking about their exciting ideas for what drones can do. And it’s pretty difficult for businesses to adopt that at the moment, the way things are working now.”

Vierboom’s startup, Propeller Aerobotics, has made the process of connecting data to the cloud easier through the creation of a new platform called Aerodata.

From there, businesses can integrate drone-collected data into external third-party apps and cloud services through its APIs, or view the data directly through an app called Aeroviewer.

The startup is one of 19 in the semi-finals of Cisco’s Internet of Things (IoT) Innovation Grand Challenge, with a winner set to be announced on September 18.