Could Tesla’s Model X drive us towards electric cars for all? 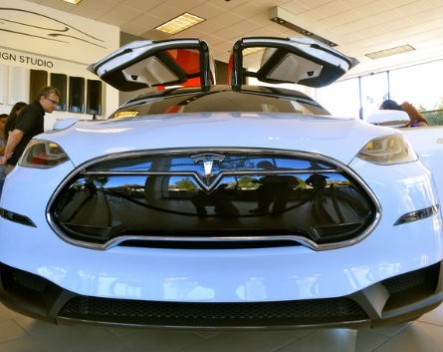 The launch of Tesla’s long-awaited Model X electric car has received the sort of adulation that we’ve come to expect of new products from Apple. The Model X is a SUV with gull-wing doors – as made famous by the DeLorean from the film “Back to the Future” – giving it the appearance of a supercar, to go with its hefty pricetag. But filter out the hype, and the question is whether this will make the slightest difference to encouraging a broader shift away from fossil fuel-powered cars to electric vehicles.

Let’s take a look at this question from the perspective of China, the world’s largest car market and one officially committed to leading the world when it comes to electric cars. At around US$130,000 each, and likely more including import duties, it’s obvious that this is a car that will only be affordable in China to a tiny elite. Tesla’s cars seem like rich men’s toys with no significance to the problem of popularising electric cars. Yet in fact that’s exactly what the Model X could do.

Rather than judging the extent of a shift to electric vehicles only by the slowly growing sales of electric cars, consider instead what’s needed to transform our entire approach to urban mobility. This will require considerable change in a number of areas, most of which are not technological, but social, cultural and political.

So the “success” of electric vehicles revolves in large part around changing “common-sense” in these areas – a big and complex challenge, where so far change is slow in coming. But one strategy that does seem to be effective in disrupting the dominance of the fossil-fuelled internal combustion engine is designing and selling glamorous, elite, branded electric cars – a niche in which Tesla leads, including in China.

Sales of electric cars sold as “conventional” cars remain stubbornly dependent on government subsidies. This is chiefly because of the cost of the batteries, which leads to the car’s price rising unfavourably in comparison to combustion engine vehicles, while bringing little additional consumer appeal and many unfamiliar risks. Conversely, sales of Tesla’s cars do not rely on subsidy – the company is self-sustaining in terms of the cycle of revenue and investment in R&D.

So a key factor that works massively in favour of Tesla’s strategy and against the conventional electric car is consumer demand. Teslas are bought for the car itself and its image, not primarily because they are electric or environmentally friendly. In this case, then, the more elite and exclusive the better. This particularly matters in China, where display of social status through consumption, and especially through cars, is a national obsession.

With this in mind, the new deluxe Tesla sports SUV may actually contribute towards bringing an electric vehicle future closer in several ways. It cements Tesla’s reputation as a top-class luxury brand, alongside Ferrari or Maserati – an object of intense aspirational consumer desire. And as a highly visible car (normal electric cars are both so few in number and look so much like any other that they go unnoticed) seeing them on the streets also shapes what electric cars mean to people. In other words not a milk float or golf buggy, but the epitome of what a 21st century car could be. This shift could drive demand which, moving steadily down the income scale, increases demand for similar, less flashy electric vehicles.

Tesla’s distinctive approach to home-charging combined with long-range batteries is also stimulating greater efforts from government to put charging infrastructure in place. This is vital as a more widespread charging infrastructure is key to mitigating one of the main hurdles preventing drivers buying electric vehicles: the fear of running out of power. Sales also support Tesla’s efforts to transform the economics of lithium batteries, where cheaper, more powerful batteries would begin to shift the cost-competitiveness to the buyer away from conventional towards electric vehicles.

And there are other systemic effects that growing sales of electric vehicles may bring about, especially in China. Larger sales of Teslas in China add to the intense pressure felt by Chinese car companies regarding Tesla as a foreign interloper that threatens to grasp the lead in the electric vehicle market. This may shake things up further in a country that is ostensibly committed to leading the way in developing the electric vehicle, driving further innovation and investment.

So while we can safely say that the Tesla Model X will not sell in sufficient numbers to transform our roads and cities single-handedly, it may yet inspire a step-change in manufacturer competition and innovation, government support and consumer demand for electric vehicles more generally, not least in China.