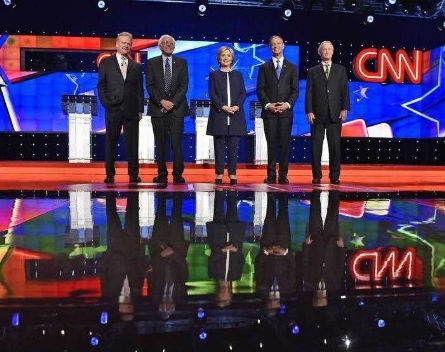 Wednesday morning’s US Democratic presidential hopefuls debate marked a world first, with CNN live-streaming the news event in virtual reality, although the experience was been labelled as “boring” and nauseating.

The network teamed up with Next VR for the broadcast and used four special VR cameras to do it.

The stream was meant to provide a completely immersive experience for the viewer and is part of a push to make virtual reality more accessible and mainstream. This movement is likely to be given a big boost soon with Facebook introducing VR videos into the newsfeed.

“You are the cameraperson. You can look around wherever you are,” Next VR co-founder DJ Roller says.

“You’d probably get attacked by the Secret Service if you tried to get as close as these cameras.”

According to CNN, people from 73 countries across the world used VR headsets to watch the debate, but the whole process has been branded “underwhelming” by many commentators.

Although it’s a landmark moment for VR, it seems there are still many kinks to be ironed out.

Mashable writer Jason Abbruzzese says the entire experience made him almost throw up.

“I can faintly hear my co-workers cracking jokes in the background, and I already miss my Twitter feed.”

There lies one of the big barriers preventing the widespread adoption of consuming content through VR: at the moment it’s an entirely isolating experience where users can’t interact through social media or talk to friends.

CNet described the experience as “watching five barely recognisable people face off for two hours as a heavy, awkward headset holds an overheating Samsung smartphone inches from your face”.

The headset that CNN provided was simply a smartphone with the Oculus app installed attached to a pair of “bulky” goggles.

Slate summed up the VR process in one word: “boring”, with Katy Waldman describing it as being “stuck in a kaleidoscope while you try to study”.