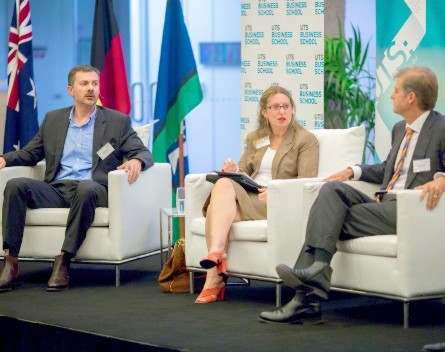 The entrepreneurial spirit needs to be fostered in Australia not just among individuals but also within organisations, according to panellists who dissected the challenges facing business at a discussion hosted by UTS Business School.

This requires more explicit government policy, readier access to funds and a culture where risk-taking is accepted not punished, they said. Government at all levels, investors, industry and universities all have important roles to play, especially by collaborating.

“It might be an exaggeration to say Australia is at a turning point, but I think everybody would accept that now is a moment for reflection and reassessment of our direction as a country,” Professor Green said, introducing the discussion.

And the challenges Australia faces are serious, he said. “We have seen the end of the terms-of-trade boost that added 15% to our national income over six years. We as a country have to find new and alternative sources of growth and productivity to secure our first-world economy … we have to identify new sources of competitive advantage, creativity and innovation.”

Asked where the new sources of growth might come from, Turner said: “I think at the core of it is going to be entrepreneurialism – and entrepreneurialism is not just about startups but key to every facet of the economy, whether it’s small business, medium business or large business.”

Entrepreneurialism and innovation are correlated, he said, with innovation being a function of both “creativity and commercialisation” – one didn’t matter without the other.

However, a big hurdle in Australia is funding, with very small amounts being devoted to venture or development capital in this country, he said. This is driving people with ideas overseas.

Ironically, Australian institutional investors could also be found in places like Silicon Valley, partly because government incentives encouraged investment in startups in the United States. “That’s a mark of failure that has to be addressed,” he said.

It was also an urgent need because 70% of Australian industry was services based, and such businesses were ripe for disruption by technology, he said. “The best form of defence is attack, by creating these new, disruptive businesses,” he said. “Australia has a very narrow window in which to do that.”

The City of Sydney’s Monica Barone said Australia lacked an innovation ethos. “I think one of the things we need to focus on is having an explicit policy around innovation that really helps to address how we want to evolve,” she said. “People could then feel confident to invest or innovate.”

From the city’s point of view, if Sydney wanted to be regarded as smart, innovative, youthful and creative it could not afford to lose talent to other cities. “Creative people want to live in a great city, a city where they have proximity to other creative people,” she said.

That is happening, Prof Green said. The transformation of the city – from Barangaroo on the inner harbour to Australian Technology Park south of the CBD, and including the $1 billion redevelopment of the UTS City Campus – was more profound than many Sydneysiders had yet recognised, he said. “The creative precinct around us potentially compares with some of the best creative hubs around the world.”

The sort of collaboration that this engenders is critically important, AMP Capital’s Stephen Dunne said. “The opportunity to collaborate with your peers, with your competitors, with various levels of government, with research institutions, is very important to solving the issues we face in the Australian economy.

“These long-term and critical challenges such as productivity and energy transformation do require collaboration and thinking that no one player can do on their own.”

Businesses are created at the intersection of corporates and universities, Turner said. “Some of the things that UTS is proposing here, in creating a ‘clustering’ ecosystem, is exactly what works. It’s that sort of environment at MIT, at Stanford.”

Programs such as the Bachelor of Creative Intelligence and Innovation were also a step in the right direction, he said.

Business schools can also play a role in helping organisations “reconceive” themselves in terms of collaboration across a broader system and how they can incorporate entrepreneurialism, Dunne said. “They are often the best placed to provoke and experiment – by encouraging innovation from within.”

Lesley Parker is the media officer at UTS Business School