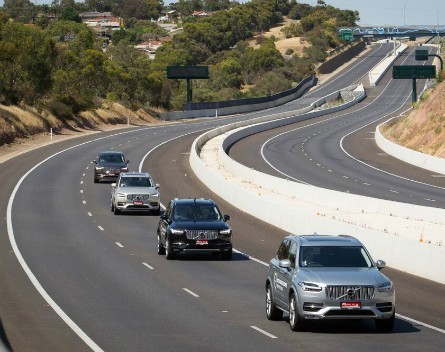 Driverless cars have hit roads in the Southern Hemisphere for the first time over the weekend during a demonstration in Adelaide which marked a “major turning point” for the technology.

The controlled test on a section of the Southern Expressway in South Australia saw two driverless cars put through their paces.

It was part of a trial to demonstrate how far this technology has come and its immense potential that was conducted by independent road expert ARRB, the Australian Driverless Vehicle Initiative and Volvo.

The Volvo XC90s are at the third stage of automation, and are able to automatically keep lanes, adapt cruise control, have active queue assist and change lanes.

The trial on Saturday was more about demonstrating the technology than testing it technically, ARRB general manager Gerard Waldron says.

“We’re hoping to raise awareness, we want it to be the ‘ah’ moment,” Waldron tells StartupSmart.

“For us it’s a success just because it’s raising awareness. Every journey begins with a first step, and this week is a first step for Australia.”

Saturday’s demo was the culmination of many years work from the small band of enthusiasts and experts.

“I started talking about driverless cars in any place that people would let me for the last three years,” Waldron says.

“For the first two and a half years everyone just thought I was an idiot.

“Now people can stand up and say, ‘this is coming’. They do recognise it’s going to happen and there’s a very positive attitude towards taking advantage of it.

The autonomous cars travelled at speeds up to 70km per hour along with a ‘pace car’ to simulate traffic and showed “first-hand how the driverless vehicle technology interacts with other road users and adapts to changing conditions”.

It was the first time in the southern hemisphere that a driverless car has been let loose on a public road.

Volvo senior technical leader Trent Victor was behind the wheel of one of the cars, but didn’t have much to do. He says for Volvo it’s all about giving something to the customer.

“We’re giving time to the customer and the possibility to do something meaningful while you’re driving,” Victor says.

He says the technology is targeted at commute driving, and 100 of the same vehicles will be in public’s hands in Sweden next year.

The demonstration was a “major turning point” for driverless cars in Australia, Waldron says, and is a big step in ensuring this technology is adapted to a local context.

“It’s hugely important. We need to get ready for this technology if we’re to get the productivity and road safety advantages out of it,” he says.

“If we don’t start the discussion now we’re not going to have laws and regulations in place, we won’t have trialled the technology in Australia circumstances. When the vehicles come from overseas they need to be able to read Australian road signs, recognise the line markings, be able to accommodate the peculiarities of our wildlife and vegetation.

“We have to get access to testing opportunities and data that’s based on Australian circumstances rather than us be told we have to do a whole lot of extra work in some future time to adapt. This way the Australian conditions will be built into the brief from the start.”

“If we don’t make a start down that path we’ll end up being one of the last countries in the world to adopt them rather than one of the first.”

There’s a big opportunity for Australian entrepreneurs and companies to reap the benefits of this new, rapidly growing technology, he says.

“The South Australian government is saying that it’s open for business in this space.

“That presents some really good opportunities for the tech providers to trial and demonstrate their technology here under safe and accommodating circumstances.”

Waldron says that “at least” six more similar demonstrations will take place around Australia next year, and he hopes legislation that allows for more trialing of the technology is passed in all states and territories.

“Ultimately governments need the permission of the public to introduce legislation and new technology, and that only comes with the public being informed and having an opportunity to inform themselves,” he says.

“That’s what this is more about, rather than a technical test.”

South Australian premier Jay Weatherill says he wants the state to be a global leader in driverless cars.

“We want to be at the forefront of this paradigm shift towards an industry which is anticipated to be worth more than $90 billion globally by 2030,” Weatherill says.

“This industry has the potential to revolutionise transport in Australia.”