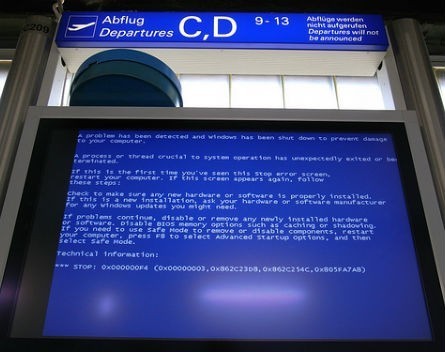 We’ve all been there. The presenter is about to begin, but then disaster strikes: the computer technology fails. Perhaps the computer has fallen asleep, the data projector is using the wrong input, or the mouse clicker has run out of juice.

This is why wise presenters always have a backup plan. After all, our trust of computer technology is not high. But why is trust of certain technologies low and of others comparatively high?

For instance, when we take a flight, we don’t normally have a backup flight plan, nor do we feel the need to keep a washboard on hand in case our washing machine fails. But for some reason, some technologies occupy a special place, where trust is dangerous and fear arises more naturally.

We seem to have an adversarial relationship with some technology. The clip below shows a memorable instance where then Microsoft CEO Bill Gates was confronted with the dreaded windows blue screen error message during an important presentation about a new release of Windows.

In its day, the Windows “Blue Screen Of Death” (BSOD) was infamous for letting hapless users know in no uncertain terms that Windows had just crashed and needed to be restarted. It was a presenter’s worst nightmare!

But the BSOD was also famous for displaying a screen full of memory dump data in which, presumably, the answer to the problem was magically embedded. To be fair, the screen included good advice, like checking that any new hardware or software had been properly installed.

The clip with Bill Gates gives one clue about why we don’t trust these machines: they are too smart. The apparent intelligence of devices like computers sets them apart from less interactive technologies, such as washing machines or refrigerators. There is a lot of latitude for things to go wrong with computers.

At times people may exclaim “but I don’t know what it just did” or “what if I break it?” in reference to a computer. Most users don’t understand how the computer works, or what could go wrong, and this makes the machine difficult to trust.

Even at Microsoft, technology failure can be mysterious, leading to Bill Gates’ spontaneous remark in reaction to the above video: “That must be why we’re not shipping Windows 98 yet.”

This is in contrast to other types of machines we do trust, such as the washing machine. When the washing machine spin cycle is interrupted, you guess that the drum has become unbalanced and you need to redistribute the clothes and restart it. We think we understand how the machine works so we trust it much more. It never gives us a BSOD style message that proves how little we know.

Think about it, how often have you heard somebody say “I don’t know what it just did” in reference to a washing machine?

If you talk about cars to enthusiasts born in the 1950s, they may regale you with stories about working on the transmission, or changing the exhaust pipe, or tuning the engine. They enthusiastically demonstrate that they knew exactly how their cars worked and how to fix them.

Today, it’s not so clear-cut. Ordinary car owners would not be comfortable working on the adaptive cruise control, the assisted parking system, or the emergency brake assist. Ask drivers how these work and the best answer is likely to be “the computer does it”.

Yet arguably, there exists a high degree of trust in cars despite the extensive computerisation. In their hearts, the enthusiast still knows how the car works.

Just as Baby Boomers grew up with cars, today’s children grew up with computers in their everyday lives. Children today (i.e. “Millennials”) have had more exposure to computers as a percentage of their life experiences than any previous generation.

For them, much of the mystery of computers is absent. Because just like granddad working on the cars, our kids know more – or think they do – about how their gadgets work. This engenders trust and a lack of fear of clever technology.

So, next time you get frustrated with your computer, find a Millennial and remember that even the experts sometimes get flustered. Even Steve Jobs, famous for his flawless presentations of cool technology, wasn’t immune.

Which does make us wonder: if Steve Jobs and Bill Gates can’t trust their own technology, maybe there is good reason why the rest of us do not!