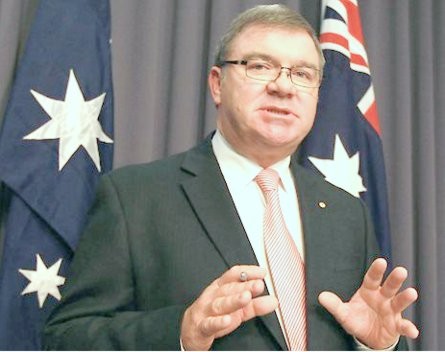 Gray, the member for Brand, will serve as small business minister within the Gillard cabinet, following the resignation of Chris Bowen last week.

However, much like Bowen before him, Gray has been landed with a varied list of jobs. He will also be responsible for resources, energy and tourism – with the former portfolio likely to dominate his in-tray.

Bernie Ripoll, the member for the Queensland seat of Oxley, will be Gray’s parliamentary secretary for his small business duties.

In a further move that will potentially impact start-ups, the Department of Climate Change is to be merged with Department of Industry and Innovation.

In a press conference held today, Gillard said Gray has “been a tireless advocate for business in his own community and in Western Australia and will bring that purpose to promoting the interests of the tourism sector and small business.”

Gray was previously a special minister of state for the public service and integrity. Born in Yorkshire, England, Gray has a long record in heavy industry since moving to South Australia in 1966 – working in a BHP steelworks and later becoming an executive at Woodside.

Bruce Billson, the shadow small business minister, was quick to point out that Gray’s small business portfolio was “bolted onto the big business” of resources of energy.

“Gary Gray hasn’t shown an interest in small business for more than two years having last mentioned the sector in Parliament in March 2011.”

Gray becomes Labor’s fifth small business minister in little over a year and the sixth since it won power in 2007. Bowen, the previous incumbent, held the role for just over a month before he resigned due to his backing of Kevin Rudd in the aborted leadership spill last week.

Meanwhile, Gillard said she was “appalled” by the farcical situation of a leadership ballot being called, only for Rudd to refuse to run.

“My political party, the Labor Party that I love, very clearly was self-indulgent,” she said. “It is now very clear indeed that I have the confidence of my colleagues to lead the Labor Party and to remain as prime minister.”

In a raft of ministerial appointments to replace the Rudd supporters who fell on their swords last week, Gillard promoted Anthony Albanese to oversee regional development and local government, replacing Simon Crean, who was sacked for instigating the botched spill.

Craig Emerson, himself a former small business minister, has taken on tertiary education, alongside trade and competiveness, Sharon Bird will be responsible for higher education and skills and Tony Burke adds arts to his environment portfolio.

Commenting on the rejig, Innes Willox, CEO of the Australian Industry Group, said: “The merger of the Departments of Industry and Climate Change highlights the importance of the general links between industry competitiveness and climate policy and the particular importance of programs that reduce businesses exposure to carbon pricing and higher energy costs.”

“With some energy efficiency functions going to the Department of Resources, Energy and Tourism, it is essential that the policies assisting industry to manage the carbon price and rising energy prices remain coordinated.”