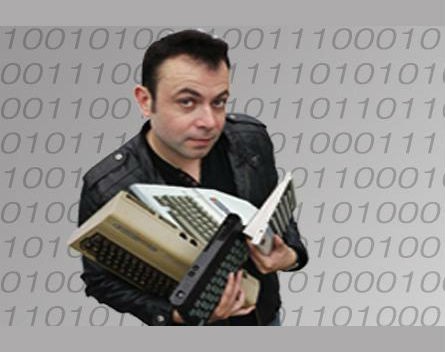 Computers. Love ‘em or hate ‘em, you’d be hard pressed to find a person who has never experienced them in one way or another. They are part of our world, integrated into our lives through our phones and our cars.

In his show at the Melbourne Fringe Festival, Control Alt Delete: The Funny Side of Computers, British comedian Dan Willis expertly guides the audience through the evolution of the computer from Frogger to Facebook.

Willis began his working life as a computer programmer before turning to comedy after the dotcom crash. I will admit I was a tad concerned when I read this because I feared his jokes would fall beyond my understanding. My fears were unfounded. Geeks and non-geeks will find Willis and his comedy accessible and very entertaining.

Willis is the only live comedian I’ve seen use a PowerPoint presentation to illustrate points throughout the show. The cordless remote/laser pointer worked quite naturally with the content and did not disrupt the flow or distract from the comedy. In fact, being able to see pictures of the early computers that were so revolutionary added to the content instead of detracting from it.

His childhood excitement about the boundless potential of these early devices is palpable. The audience can feel the triumph of a 12-year-old Willis discovering he can hack into a game he was playing. Those of us in the audience old enough to remember those computers can still connect with the common human experience of the world changing over time, even if we didn’t use them ourselves. The nostalgia of how things looked in the 80s is sufficient basis for shared humour.

Willis discusses the clichéd perception of computer programmers being socks-in-sandals-wearing virgins. The perception is actually quite varied based on his experience of being a programmer, knowing many and watching Hollywood’s portrayal of computer geeks from Weird Science to Swordfish.

This access to cliché isn’t a bad thing. It brings the audience into mutual recognition of the hilarious incongruity that we have all seen, but didn’t notice. Even the often-used “turn it off and on again” gag, immortalised in the TV series The IT Crowd is used with sufficient skill to still elicit laughs.

I think the key to this show’s success is that it isn’t the computers or the programming that is funny, but the way humans interact with computers. Our quick uptake and use of computers in truly human ways – to find love or to dump it – is something we can all relate to. It wasn’t the programing that was funny, but the programming of code to address common human experiences such as mates getting the groom drunk at a buck’s party. (Yes, Willis wrote a computer program to do this!)

Willis interacts with computer-savvy geeks in the audience, sharing in-jokes that the rest of the audience may not understand, but is then able to explain the joke to the rest of us without killing it. This is an uncommon skill. Indeed there were occasions where the act of explaining the joke was fodder for more jokes, hitting a strange and enjoyable meta-joking.

He equally engages with others in the audience – the young, to illustrate changes in computers and the perception of them over time; the non-computer-savvy to illustrate differences between in-group and out-group perceptions. I can say that while he is interactive and talks to the audience, it is safe to sit in the front row. He did not embarrass or disparage any of the audience members, geeks or otherwise.

Willis has brilliantly transitioned from programmer to comedian and has truly crafted his shows and his skill in delivering them. The 60-minute show is currently running at the Courthouse theatre: a relatively small venue, seating around 25 to 30 people above a lovely pub and is well worth a look.

Jay Brinker does not work for, consult to, own shares in or receive funding from any company or organisation that would benefit from this article, and has no relevant affiliations.