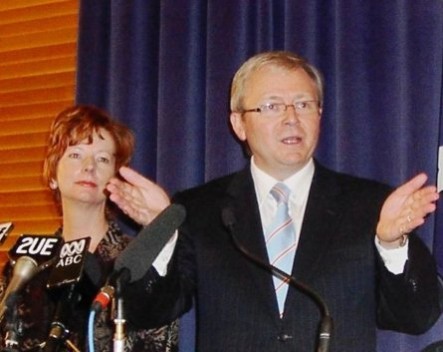 It’s prime ministerial party time, with Julia Gillard declaring a ballot for the Labor leadership will be held at 7pm this evening. Check Crikey’s liveblog for the latest developments.

Prime Minister Julia Gillard has just announced that a leadership ballot for the Labor Party will be held at 7pm this evening. In an interview with David Speers on Sky News, Gillard said that she hopes to win the ballot and will leave the Parliament if she does not win.

“Tonight is the moment for caucus to decide. I accept that so fundamentally that if I am not successful I will resign at the next election. I ask the same of any challenger,” said Gillard.

Kevin Rudd is yet to announce whether he will challenge for the leadership. Rumours have been circulating all afternoon that a petition has been going around Parliament House with MPs calling on Gillard to allow a leadership ballot. Gillard says she has not seen the petition.

“I’ve been wryly joking with some of my colleagues this petition is the political equivalent of the Loch Ness monster… I’ve got an obligation to the nation, we are talking about who leads the nation, I am not going to let that speculation run endlessly.”

“This is the moment for Caucus to decide. I accept that outcome,” said Gillard.

“I’ll let my caucus colleagues decide. What has always driven me in politics and will continue to drive me … is getting things done in the accordance of Labor values for a Labor purpose,” said the Prime Minister.