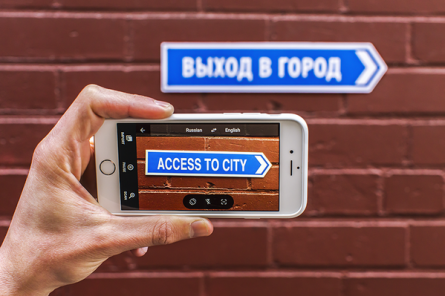 Google rolled out the update for its popular Android and iOS apps today, allowing users to point their smartphone’s camera at foreign text and receive an instant translation which is overlaid on the screen.

The company says this will make it easier for travellers to navigate rural areas or decide what to order off a foreign menu. Instant translation through the camera function is currently available for French, German, Italian, Portuguese, Russian and Spanish – with more languages to follow.

The update also sees the rollout of real-time voice translation software, allowing conversations between two people who do not speak a mutual language to “flow faster and more naturally”.

Real-time conversation software has been available on Android since 2013, however this is the first time the feature will be available on iOS.

In a statement, Google said the iOS and Android updates transform users’ phones into a more powerful translation tool.

“Today’s updates take us one step closer to turning your phone into a universal translator and to a world where language is no longer a barrier to discovering information or connecting with each other,” the company’s statement reads.

More than 500 million people use Google Translate each month. According to Google, the software handles more than one billion translations a day.