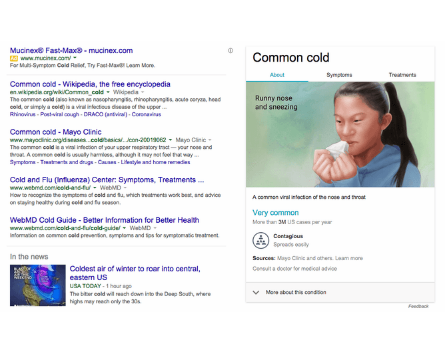 Google has rolled out a new health search feature that details basic facts about 400 common medical conditions. Available initially only in the US, searches for conditions like “Common Cold” will bring up a sidebar giving information about the condition including how common it is, symptoms and treatment. All of the information has been fact-checked by doctors at the Mayo Clinic.

Google claims that this information is aimed at delivering facts to the general public to give them the information that they really need if faced with questions about a particular condition or set of symptoms.

What is in no doubt is the need for qualified medical information on the Internet. Nearly 60% of US adults have used the Internet to look up health information with 35% looking for information regarding specific symptoms. Of those that consulted a doctor on the basis of this information 70% had their diagnosis confirmed by the clinician.

Google’s addition of health information, derived from its so-called “knowledge graph”, is an interesting technological development. Although this information has been subsequently validated by doctors, it is not at all clear that it will be terribly useful to a member of the public really trying to understand a set of symptoms or a condition.

Unlike a normal search that is based on comparing the spelling or grammatical use in a piece of text, Google’s knowledge graph works by relating information found in searches according to its meaning. A search for a US politician like Benjamin Franklin for example will bring up a sidebar with information detailing where he was born, where he died, who he married, when he was in office and so on. This information can be discovered automatically and relies on the search understanding that a specific date relates to a person’s birth and not an unrelated event. The founder of the World Wide Web, Tim Berners-Lee has argued for some time that developing the technology behind the “Semantic Web” that facilitates the knowledge graph will be the next major evolution of the Internet.

The problem with this approach is that it is good for assembling facts about something, but not particularly good at actually conveying those facts in a way that can be easily understood. It does not present the information in meaningful context in an engaging way. This is the case with the health information provided by Google through their health search feature. It is also based on very simplistic types of search. You can’t type in a symptom like “Child with Fever” and get the conditions that might be related to that symptom. This is despite the fact that seizures in children with fevers is relatively common.

The second problem with the information presented is that it is incomplete and so can actually be misleading. Information about “thrush” (Candidiasis gives the impression that it is only a problem genitally for women, making no mention of men. It also doesn’t make the association between thrush and diabetes.

In the discussion around this new feature, there has been the assumption, that has also been emphasised by Google themselves, that the information presented on the Internet about health is somehow inherently unreliable. This is slightly ironic given that Google’s major source for the knowledge graph searches is actually Wikipedia. The Mayo Clinic themselvesprovide high quality information about a large range of health conditions. There are a range of national bodies and specialist foundations that also provide validated and accurate information. In addition, sites like WebMD provide a mechanism for searching based on symptoms.

In any case, Google already does a good job of listing the most reputable health sites first when anyone searches for a specific condition. The problem is not necessarily about the quality of the information, but the general public’s ability to make accurate and meaningful sense of it.

It is too early to say whether Google’s feature is actually a good or bad development and whether it actually serves any useful purpose beyond information already provided in multiple sources, including Wikipedia. It is going to take a reasonable amount of effort and money for Google to roll this out beyond the US and presumably they will only do so if it is really shown to be worth it.