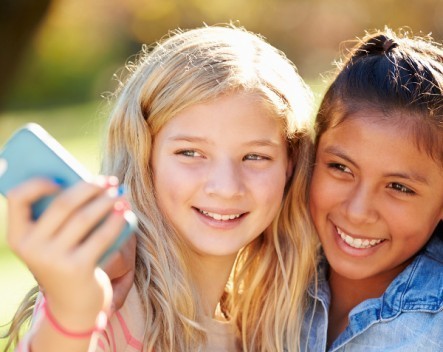 Interactive devices allow parents to occupy their children for a time so they can complete a range of daily activities, including catching up with friends, shopping and eating out. But their growing use has been accompanied by horror stories about all kinds of negative social and intellectual impacts.

Unlike the passive act of watching television and videos, which has been associated with an inability to learn, apps and games on mobile devices are interactive and provide feedback in the form of answers and praise. They allow children to make decisions, create, develop co-ordination skills and even socialise at the click of an app icon.

Rather than being harmed, children could actually benefit from such devices.

A 2010 US survey found young people aged between eight and 18 devote seven-and-a-half hours a day to entertainment media and that this number is likely to increase if they aren’t monitored and guided by parents.

But if used sparingly, and with accompanying advice that the device is a treat to be used for a limited time, interactive devices can engage children and allow parents to get much-needed mental space so they can conduct their lives in a less stressful way. And this means kids benefit from spending time with parents who are more relaxed and able to focus on them.

It’s only when interactive devices are used regularly as a tool to silence and distract them that children become less able to regulate their own behaviour. This can lead to fraught interactions with parents and others outside the family environment.

As they learn through experience, it should come as no surprise that parents who become absorbed in using their devices will have greater difficulty convincing their kids not to engage in the same action. Lead by example and be aware that your child’s misbehaviour might be due to what you’re doing rather than the device use as such.

Using interactive devices with your child can also have many benefits. Electronic books and learn-to-read or spell apps, for instance, are becoming ever popular and research shows they increase early literacy skills.

But some interactive apps that claim to promote learning have been developed without a tested educational component. Games developers are cashing in on the learning tool trend. They know that children will spend as much time as opportunity allows to play on devices.

Another problem is that adolescents, especially boys, often engage in playing violent games. Excessive exposure to game-based violent acts, combined with rewards for winning fights or battles, has been linked to increased adolescent aggression.

Still, it’s not all doom and gloom. When playing games that reward the user for building a town or helping others, children tend to show more empathy and helpfulness in their daily lives.

It’s vital that parents assess the content of the app or game, as well as the time their kids spend on interactive devices. As older children and adolescents will find ways to sneak onto interactive devices, especially before sleep, parents need to create standards early on, set good examples and be vigilant.

As the younger generation loves interactive devices and can’t recall a time without them, educators, health professionals and clinicians have begun to work with software and games developers to create opportunities to use them to actively monitor, test and treat a range of child and adolescent issues.

Evidence-based apps and programs are now being used to train working memory and attention skills, and address problems with social skills as well as mental health issues, such as anxiety and depression.

Perhaps the best advice for parents is to monitor the content of the apps their kids access and tell them from a young age that they’re for “sometimes use”, just like sweets and lollies.

New technologies have often caused panic so it’s important to be aware that perhaps our concerns are more reflective of the lack of knowledge in this area. For now, enjoy the time you have with your children, some of which will inevitably involve an interactive device.