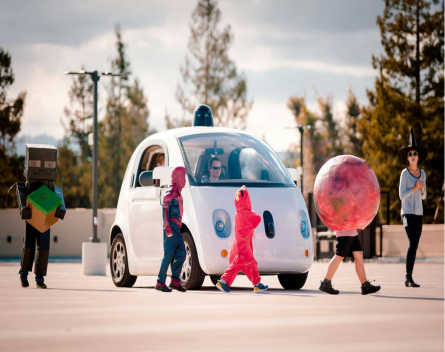 While many of us were dressed in spooky costumes, Google’s fleet of loyal self-driving cars were making the most of the unique challenges presented by Halloween.

In its monthly report on autonomous vehicles, Google says Halloween provided a great opportunity for its cars to learn more about children specifically, with the array of costumes providing a much-needed challenge.

“Halloween’s a great time to get some extra learning done. This week, lots of little ghouls, superheroes and even robots were running around Google with their families, so we asked them to hang out around our parked cars,” the report says.

“This gives our sensors and software extra practice at recognizing children in all their unique shapes and sizes, even when they’re in odd costumes.”

Google is in the process of teaching its self-driving cars to be a bit more careful around young children, whether they’re dressed up as vampires or not.

“When our sensors detect children – costumed or not – in the vicinity, our software understands that they may behave differently,” it says.

“So even if our cars can’t quite appreciate the effort the kids put in dressing as their favourite character from Frozen, they’re still paying full attention”

The report also includes a thinly-veiled jab at autonomous car rival Tesla, outlining the issues with ‘semi-autonomous features’ such as Tesla’s Autopilot that it encountered during early tests.

“People didn’t pay attention like they should have. We saw some silly behaviour, we saw human nature at work; people trust technology very quickly once they see it works,” the report says.

“As a result, it’s difficult for them to dip in and out of the task of driving when they are encouraged to switch off and relax.

“Our tests led us to our decision to develop vehicles that could drive themselves from point A to B, with no human intervention.”

It comes as numerous videos have emerged showing people being pretty stupid with the new Tesla feature, and certainly not paying as much attention as they’re supposed to.

“Everyone thinks getting a car to drive itself is hard. It is,” Google says.

“But we suspect it’s probably just as hard to get people to pay attention when they’re bored or tired and the technology is saying ‘don’t worry, I’ve got this…for now’.”