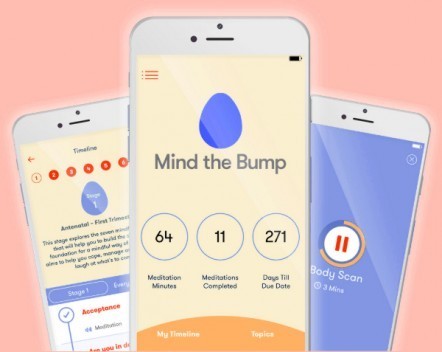 Beyondblue and Smiling Mind have released a new iPhone and Android app that aims to reduce the risk of developing postnatal depression and other mental illnesses among new parents.

The free app, titled Mind the Bump, was released alongside Postnatal Depression Awareness Week, which runs from November 16 to 22. It comes against the background of growing interest in both health tech and social entrepreneurship.

It provides mindfulness meditations to both mothers and their partners for the period between the earliest stages of pregnancy through to when a child is 24 months old.

“Certainly there’s been a lot of research lately about how tech is taking over our lives and overstimulating us. But it can also use it to engage in the real world,” Richards says.

“Through our psychologists and psychiatrists, we’ve identified the key stresses that come with pregnancy: change, identity and a changing relationship with your partner. There are exercises in this app that can help new parents overcome those stresses.”

According to Richards, apps are a cost-effective way of delivering services, while partnerships between social entrepreneurship startups and traditional charities can help to avoid duplication.

“So Smiling Mind is a new non-profit founded in October 2012 that is trying to get mindfulness added to the curriculum by 2020. We think that stress management and resilience are invaluable when taught at a young age,” she says.

“So we teamed up with Beyondblue, which has been fantastic at driving awareness.

“It’s a nice combination of old school and – very much startup – skills sets.”