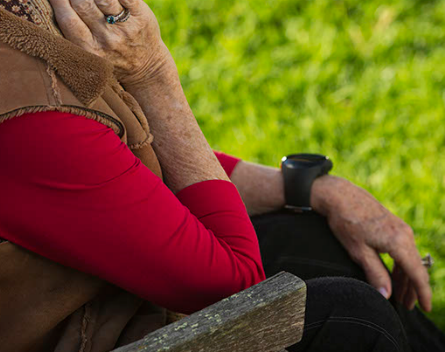 Two-year-old Sydney health tech startup mCareWatch is attracting interest in overseas markets with a smartwatch and platform that can help carers to monitor seniors both inside and outside the home.

mCareWatch’s core product is a waterproof smartwatch that bundles a mobile phone with its own SIM with GPS and Wi-Fi to track location. Unlike other pendant and personal alarm systems, such as sensor platform Curo, the standalone smartwatch works outside the home.

Aside from telling the time, the watch has an SOS emergency notification button and can make calls to one of three numbers in an emergency. It can also be set to send a ‘geo-fence’ notification when the wearer moves beyond a particular distance from their home, which can be used to alert carers to a lost dementia patient.

Carers, be they a family member or a staff member at an aged care facility, can remotely monitor patients either through an app (available for iOS and iPhone), or through a cloud-based web dashboard.

The system was created by brothers Paul Apostolis and Peter Apostolopoulos after a health scare involving their elderly father, and comes as the health tech innovation community is booming across Adelaide, Brisbane and Melbourne.

Apostolopoulos told Private Media the device is aimed at providing extra mobility for wearers inside and out, allowing them to visit friends, go shopping or have an evening walk with peace of mind.

“We launched the first generation about two years ago. We knew we wanted to enter quickly to test the market and get feedback,” Apostolopoulos says. “When we first launched, the service focused around the mobile app and was originally around the consumer being able to monitor mum and dad remotely.

“We launched the second generation with new features like Wi-Fi and an improved charging mechanism, and we took it into aged care providers with a software solution… Our customers now include Able Care, St Vincent Care and Bankstown City Aged Care, which introduced it as part of their independent living package.”

The product is also gaining a significant amount of interest across South East Asia, appointing a distributor in Malaysia last year and recently opening an office in Indonesia.

The company plans to introduce a ‘third generation’ version of the product sometime around April or May. It has also identified other potential verticals as possible markets, such as lone workers, employees in the logistics industry, and the security industry.

“The next generation will take it more into the mobile health space. It will allow the watch to be a community hub. You will be able to connect biometric measures throughout the home to it, and it will send that information to a cloud platform and then package it for the appropriate person.”

Apostolopoulos says that, especially with an aging population, health tech is set for growth over the coming years.

“Health tech is definitely a growth area and that’s based on wearables. Preventative care is important as people stay at home more and you need technology to monitor patient’s health in a way that’s efficient.

“Preventative care is an important issue because you can provide an intervention before someone winds up in a hospital, which means more spending by governments.”