How 3D printing is helping to preserve lost cultural icons 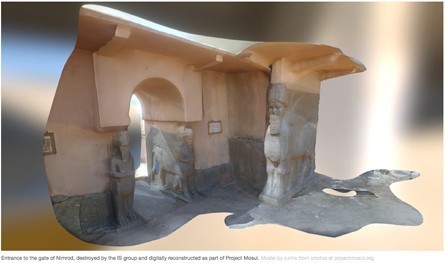 In March 2001, the Taliban blew up the Bamiyan Buddhas in Afghanistan, two of the tallest Buddha sculptures in the world. This horrific attack on an important and beautiful example of the patrimony of central Asia shocked the world. It also forever changed the landscape of cultural preservation, archaeology and global heritage.

Even back then, we had some of the 3D scanning technologies that could have allowed us to digitally document and preserve the Buddhas. We did not yet anticipate the scale of destruction that would leave hundreds of global heritage sites damaged or obliterated in the 15 years since that event.

The loss of this cultural heritage has spurred teams of researchers and nonprofit organizations to race to make 3D scans, architectural plans and detailed photographic records of heritage sites around the world, knowing they could be destroyed at any time. Advances in 3D scanning technologies, drone use and even tourists’ online posting of images are giving preservationists a new set of tools to prevent the permanent loss of cultural artifacts.

In the 1990s, several international heritage organizations were created to highlight the importance of cultural heritage to history, tourism and ethnic identity. One such group is UNESCO’s World Heritage Centre, founded in 1992. The archaeological and heritage communities cheered these efforts at preservation of important places, sites, buildings and landscapes that were being threatened or destroyed by expanding cities, hydroelectric projects, coastal erosion and other perils.

They also acknowledged that heritage, largely for the first time, had become a target of military campaigns. Once heritage sites became identified with particular cultures, beliefs or histories, those places became vulnerable to people, including the Taliban and the Islamic State group, seeking to destroy those identities.

Project Mosul, created one week after the video was released, is the brainchild of Chance Coughenour and Matthew Vincent, Ph.D. student researchers in Europe’s Initial Training Network for Digital Cultural Heritage (ITN-DCH). They scoured the Internet for photographs of the sculptures and artifacts, crowd-sourced for tourist photos and collected images from U.S. military personnel who had visited the museum.

That material became the basis for the digital reconstruction of the destroyed artifacts using basic photogrammetry. This technique uses photos from multiple angles of the same object to construct a 3D model of it.

The destruction of Buddhist sculptures in Bamiyan led to an early success in digital preservation: Dr. Fabio Remondino of the Bruno Kessler Foundation in Trento, Italy, used photogrammetry among other techniques to digitally reconstruct the Bamiyan Buddhas.

The effort is spreading. The Zamani Project from the University of Cape Town has spent the last 12 years documenting Africa’s most important cultural and heritage buildings, sites and landscapes. Importantly, its data are freely available and accessible.

The Democratization of Science project at the newly formed Center for Virtualization and Applied Spatial Technologies located at the University of South Florida has a similar mission: documenting, preserving and protecting the world’s cultural and natural heritage through the use of digital visualization and 3D virtualization. And like the Zamani Project, it will democratize science by delivering digital data and heritage resources to the global community.

Our project at the University of South Florida is using 3D imaging to scan entire museum collections, archaeological sites and ancient landscapes around the world. Sites and collections are chosen based on their research potential and need for preservation. Projects and laboratories with similar missions are beginning in many universities and research centers, especially in the U.K., Italy and Spain.

New technologies are making this work easier and more comprehensive. Unmanned aerial vehicles are transforming our ability to document large structures and landscapes at extremely high resolution. New methods and software for stitching together photographs to create accurate 3D reconstructions have made the creation of virtual reconstructions affordable for both students and the public.

However, the development of high-resolution 3D laser scanners has made the largest impact. This equipment aims laser beams at surfaces, records the reflected light and assembles a very sharp 3D image of the space. Combining all these, we now have the tools to digitally preserve what extremist groups would like to destroy.

The attempts to destroy some of the world’s heritage have had quite the opposite effect: an entirely new area of research and scientific practice that has transformed archaeology, heritage, paleontology, museum studies, architecture and a suite of other disciplines.

Equally relevant is the new emphasis on the democratization of knowledge through the digital availability of these data. Now any student, scholar or interested individual has access to some of the most important historical and archaeological specimens, buildings and cities in the world. These efforts bring our global cultural heritage to everyone, while helping to ensure the preservation of our heritage in an increasingly hostile world.

Herbert Maschner, Professor of Anthropology and Geosciences, and Executive Director of the Center for Virtualizaiton and Applied Spatial Technologies (CVAST), University of South Florida