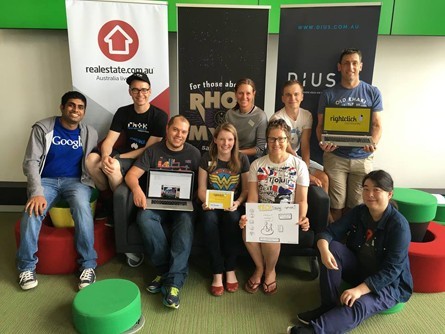 A growing community of Melbourne tech developers are working with social change-makers to create a new face for hackers.

“[RHoK Australia] connects technologists who give a shit with change-makers like charities,” Hervey says.

Hervey finds that the word ‘hacker’ draws up images of hooded cyber anarchists working in the shadows of the dark web to bring down corporations and the government with recent headlines including yet another data breach, vigilante justice against ISIS and the first-known hacker-caused power outage.

But Hervey’s experience with hackers has been in stark contrast.

“The original meaning of the word ‘hack’ is to create a solution to a problem that hasn’t been created before,” he says.

Read more: How a group of change-makers are altering perceptions of hacking

Hervey says there are hundreds of hacking groups across the country working on a range of issues for commercial interests through to social ones.

“What I love about [RHoK] is they’re everyday people with a wide range of skillsets and they are hacking together everything from how to help refugees through to getting a payment system up online for a charity,” he says.

These are some of Hervey’s favourite hacking developments in Australia.

Hervey says the winner of their last hackathon, Local Linguist, is a user-friendly mapping app designed to preserve Indigenous languages.

“[It] allows local researchers to show people pictures of things and get those recorded in the original language,” he says.

The data is then uploaded to a database accessible by World Bank researchers and linguists so they can map the languages.

“They can learn a lot even just from a few words,” he says.

Until now this has been almost impossible because of the cost of sending highly paid researchers into remote areas, Hervey says.

Once the app is rolled out, local researchers in any country will be able to collect and upload data on indigenous languages for analysis and preservation by the world’s leading linguists.

Another app that developed at a RHoK Australia hackathon is Right Click Community, a platform linking teenagers with seniors to exchange digital literacy skills.

Hervey says he loves the idea because it not only helps seniors to get skilled in computers and teenagers to gain teaching experience while also tackling the generation gap.

“Often, teenagers don’t really interact with old people and I love that that’s a way of bridging that divide,” he says.

Physical hackers in maker-spaces work on gadgets and devices to improve efficiency and the way we do things, Hervey says.

“One of my favourites is a hacker that put together a new type of wheelchair in a maker-space recently in Melbourne because they thought the existing way we make wheelchairs is useless,” he says.

Hervey says this practice of reinventing old systems forms the crux of hacking and the possibilities are only limited by imagination.

RHoK is a global initiative, which commenced in the US in 2009 as joint project of giant science and tech organisations such as Nasa, Google and Microsoft.

“They came together and said: surely we can use all these incredible communities of developers that we have to do something for good,” Hervey says.

RHoK now operates in more than 50 countries around the world with biannual hackathons running in Melbourne, Sydney and Brisbane.

Participants range from developers who have been in the industry for decades to students commencing study in art.

“It’s a great opportunity for people to really learn what’s involved in developing an app,” he says.

“It sounds overblown but hacking really does have the potential to make the world a better place.”