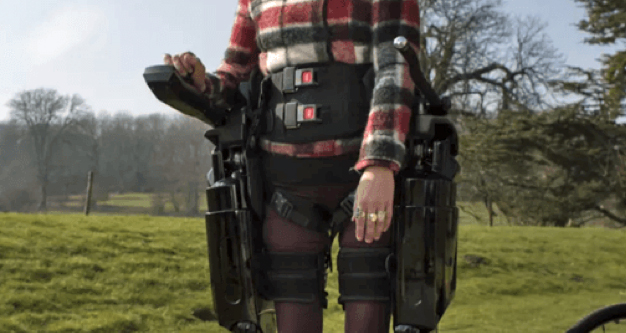 By Clive May, Florey Institute of Neuroscience and Mental Health

The development of “mind-controlled” bionic devices moved another step closer today with the publication of a Nature Biotechnology paper describing how a tiny, 3cm-long stent containing 12 electrodes could one day help people living with spinal cord injury to walk with the power of thought.

The device, called the “stentrode”, is inserted into the jugular vein in the neck and pushed up the vein until it reaches the brain’s motor cortex, which is responsible for muscle activity.

I’ve been part of the 39-person team developing and testing the device, and we’re now planning a clinical trial next year in Victoria.

The stentrode’s position, alongside the motor cortex, allows it to receive neural signals that initiate movement. It sends those signals down 12 microleads into a computer interface.

The signals are translated into information that could manipulate anything from a bionic prosthetic limb to a full body exoskeleton, a transformer-type external skeleton.

The work builds on previous research, which in 2002 found monkeys could move a computer cursor with the power of thought. This showed it was theoretically possible to control a bionic limb using thought alone.

Next, researchers used electrode devices, such as the Utah electrode array, and surgically implanted them just below the skull into the cortex in humans. These devices produced amazing results, including the ability for paralysed patients to operate a remote bionic limb, completely separated from the body, and to take a sip of coffee. These devices are still being developed by a company called BrainGate.

However, insertion of these devices requires major brain surgery that carries risks of infection, and immune rejection. Surgically implanted electrode arrays can also cause brain inflammation and suffer signal quality degradation over six months to a year.

The stentrode aims to overcome these problems. By sitting inside the brain’s vasculature, the stentrode becomes incorporated into the vessel wall, shielding it from the brain immune cells. Our preclinical studies show that the brain signals the stentrode pick up actually become cleaner and stronger with time as this blood vessel incorporation takes place.

The first patients to receive the stentrode implants will be people who have suffered a spinal injury and ended up with quadriplegia.

Then the patient’s own brain will begin a learning paradigm, very similar to learning to play an instrument, or a new motor skill. Neurons in the motor cortex will fire in response to a patient’s thought, which will then be translated into a movement of a cursor, bionic limb, or exoskeleton.

Initially those movements will be jerky, uncoordinated and produce the incorrect outcome. But through a process of trial and error, the brain’s neuroplastic properties will allow it to refine the neural activity, eventually allowing coordinated activities such as drinking a coffee, or walking with the aid of an exoskeleton.

The highly branched vascular system of the brain means the stentrode could potentially be deposited in other vessels to treat a variety of illnesses.

It has the potential to predict epileptic seizures, for instance, if placed in the brain region that gives rise to the seizures. The brain’s neural activity changes in predictable ways before the onset of a seizure. The stentrode could pick up these tell-tale warning signals, alerting the patient to cease any activities which would put them or others in danger, such as driving or swimming.

The stentrode could also be used as a neurostimulation device. Current therapies for Parkinson’s disease include deep-brain stimulation (DBS) to release the dopamine required for smooth, coordinated movements. Using the stentrode as an alternative stimulator would alleviate the risks of implanting stimulators deep into the brain.

The device could also assist people with motor neuron disease (MND) who are robbed of the ability to move, talk, eat and eventually breathe. At the stage where people lose the ability to communicate, the stentrode could be used to provide an interface for people to control a computer. This could give them precious months or years where they can continue to communicate with their loved ones.

The stentrode’s first in-human clinical trials are scheduled for 2017. Provided that we see the anticipated results, we hope that a commercially available version of the technology would be available in the first half of the 2020s.

In the meantime, one aim is to add more electrodes, allowing finer control for paralysed patients to not only walk again, but gain fine finger movements. Could we one day see a “paralysed” violin virtuoso? We can try.

Clive May, Professor of Neurophysiology, Florey Institute of Neuroscience and Mental Health