How to work out if you’ve got a viable start-up idea: Insights from the Next program 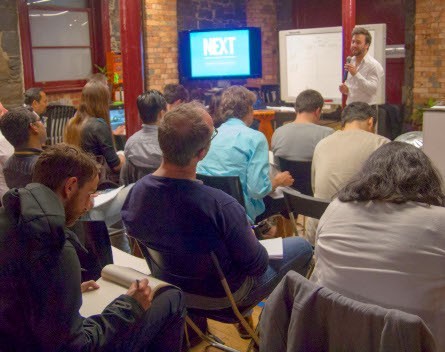 Customer discovery and honing start-up ideas were the key topics explored during the first evening of the Next start-up development program, run in co-working space York Butter Factory on Monday.

Seven mentors worked with the 27 start-up teams to develop their ideas.

One of the mentors, entrepreneur Marc Harrison, told StartupSmart the start-ups are this week focused on identifying their first target market and asking them questions to test their assumptions.

“If there was one message that was going to come across consistently, it’s that the number one thing for early-stage start-ups at the idea stage is to get out and speak to potential customers,” Harrison says. “Our advice is before you start building anything, get out and speaking to as many people as possible.”

Harrison says the mentors worked with the start-ups to identify a specific customer type who is most likely to be excited about your product.

“Most people think they want to go for the biggest market possible. A big market is great but it’s hard to tackle, and it’s really hard to develop a product for a very big market. So narrow it down to a group, and work out exactly who they are,” Harrison says.

“Because if you can’t sell your idea to your ideal client, who else would want to buy it? Pick a small enough segment so you can build a brilliant product for a group, rather than a sufficient product for everyone.”

Once you’ve identified your first target market, founders need to get in front of them and ask open-ended questions around the problem area rather than their planned product.

“Rather than saying: ‘Hey, I’ve got this great photo-sharing app, what do you think?’ ask how they use photos currently, how they share photos with their friends, what their issues are with their current options,” Harrison says. “There are three or four assumptions you’re making to know the product will work, so your first goal needs to be testing those assumptions.”

Once you’ve identified a core target market, tested your assumptions (including if there are enough potential customers to support a viable business) and refine your idea based on their feedback, founders should then start building a minimum viable product (MVP) of their offering.

“It’s not good building anything until you’ve got people banging down your door to buy it when it’s still got bugs and is half-built. Then you create a MVP and start getting feedback as early as possible on it,” Harrison says.

He says it’s highly likely the ideas the 27 start-up teams are working on will evolve over the coming weeks, and ultimately the mentors are committed to teaching a framework to approach start-up ideas through.

“The chances are most won’t go ahead with their current product, but they’ll be able to keep applying these ideas in the future,” Harrison says, adding he’s looking forward to supporting more early-stage founders.

“The community is getting fairly well developed for those who are building, scaling and going after money from investors, but we can do a better job helping those who are at the idea stage.”