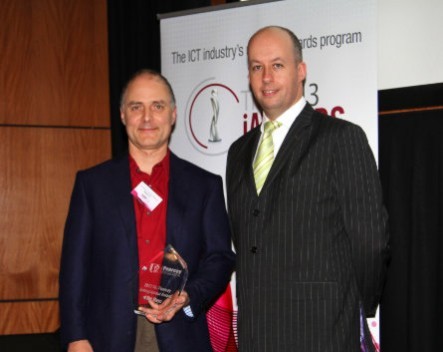 Victoria-based entrepreneur Leni Mayo and Queensland counterpart Andrew Jessett have won their respective state’s top annual entrepreneurial honours at the iAwards and shared their thoughts on the challenges and opportunities facing their peers.

The iAwards, now in their 19th year, are one of Australia’s premier technology and innovation awards covering the information and communication technology sector.

The entrepreneur of the year award is given in partnership with the Pearcey Foundation, which director, Wayne Fitzsimmons, says is aimed at encouraging more people to pursue entrepreneurial careers in technology, science and engineering.

“There is an emerging cohort of younger people who are not just having a go, and they’re very successful locally and internationally. All of these guys are breaking the barriers,” Fitzsimmons told StartupSmart.

“I’m 60, and I had inhibitions as a young man but these people don’t, and these guys are really delivering. Small to medium enterprises are the future. That’s where the employment is, all of these people starting up.”

The award goes to the most outstanding entrepreneur who has run a risk, made a difference and inspired others, with Fitzsimmons saying Victoria produced five candidates, Queensland six and New South Wales 12.

StartupSmart spoke to Jessett and Mayo about the challenges and opportunities facing entrepreneurs in their industry.

“There is an emerging cohort of younger people who are not just having a go, and they’re very successful locally and internationally. All of these guys are breaking the barriers,” says Fitzsimmons. “I’m 60, and I had inhibitions as a young man but these people don’t, and these guys are really delivering. SMEs are the future. That’s where the employment is, all of these people starting up.”

StartupSmart spoke to Jessett and Mayo about the challenges and opportunities facing entrepreneurs in their industries.

Entrepreneurs and the mining industry

Jessett is the founder and CEO of MineWare, a Queensland-based company that creates and sells mining technology and software, such as electric work shovel monitoring systems.

The company was launched in 2004 and Jessett now employs 25 people. The company operates in Australia, the United States and Canada and is expanding to Chile.

Jessett told StartupSmart the biggest challenges for entrepreneurs in the mining industry are the need to go international quickly to diversify risk, and working and competing with big companies.

“The mining technology game is one where you have to move internationally quickly to diversify the risks of any particular market,” Jessett says.

“The other big challenge is you’re working with a few really big companies. Also, your competition, the tech you’re trying to replace, also come from big companies.”

Jessett says he worked hard to build relationships with people at all levels of the mining industry to build momentum to break in. He says the award will be good for the company’s profile, as a small business punching above their weight.

MineWare’s focus will be increasingly international as the mining boom slows in Australia.

“Australia has lost its competitiveness a bit, mostly because of rising costs. Working in all these other countries, you can see the costs of other industries and it gives you a good perspective on how we’re a little bit less competitive than we need to be,” Jessett says.

Entrepreneurs and the tech industry

Mayo is a serial tech entrepreneur based in Victoria. His award was recognition of the ongoing role he’s played in the start-up scene for over 15 years.

Mayo was the founding investor of 99designs, one of Australia’s biggest tech start-up global success stories. He is currently the director of flippa.com, a website sales site, and co-founder of learnable.com, an online training hub of ebooks and videos.

He is also the founding investor of Tweaky Inc, a Victorian company that offers an online marketplace for website customisation, and 99designs.com.

He told StartupSmart the start-up scene has changed considerably since he launched his first business, selling (or trying to sell) domain names to small businesses 18 years ago.

“There was no start-up in 1996 when I launched my own business,” Mayo says. “I got really discouraged; I was just a bit too early. So I gave up and pivoted into another business (Zeo, a corporate email service) that got acquired in the dot.com boom (by Sausage Software in 1999).”

A software engineer by trade, he serves as a board member for a range of start-ups and tech companies he founded or funded. He is developing two new start-ups which are both in beta development: earl.io, a website checking software to lighten the load of running mobile, tablet and browser sites; and dashfolio.com, a small business dashboard already getting three billion page views a month.

He also does some angel investing and mentors entrepreneurs.

“One of the biggest challenges for tech entrepreneurs is staring at the face of failure and finding a way. There is a massive failure rate and there is no easy route” Mayo says.

“Start-ups are a difficult and confronting experience. You’ll always have setbacks, and they’re difficult and painful. It’s not just commercial issues, which are critical. It’s also the emotional issue of finding it within yourself to persist and taking your family and friends on the journey with you.”

National winners to be announced soon

The state winners for Western Australia, the Australian Capital Territory, Tasmania, South Australia and the Northern Territory will be announced within the month. No NSW Entrepreneur of the Year winners were announced for 2013, as the 2012 winners are in the running for this year’s national title.

The national winners will be announced on August 8.