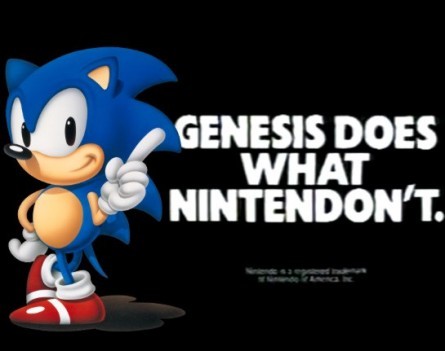 Earlier today, old Taskmaster read about an ad by Microsoft that has been criticised for attacking Apple. Apparently the folks up in Seattle think putting the latest iPhone in a range of different coloured plastics isn’t particularly innovative.

And they’d be right – Apple first offered a selection of different coloured plastics for the original iMac, back in 1998.

However, what some of you young’uns might not realise is that there’s nothing new about one tech company directly naming, attacking and mocking its rivals. In fact, attack ads have been a feature of the tech sector for almost as long as they have been used in politics.

Back in the 1980s, Commodore founder Jack Tramiel made it a regular feature of his advertising. From William Shatner having a dig at Atari while selling the VIC-20 to a Commodore 64 advert literally chewing out Apple, competitors were regularly named and shamed:

During the late 1980s, then videogame giant Sega took Commodore’s attack ads and added ‘blast processing’. Now, whether or not blast processing exists outside a counter-terror squad investigation remains dubious. Nonetheless, Sega claimed to have it and Nintendo didn’t (or should that be Nintendon’t?).

Apple is certainly no stranger to this form of advertising either. The first and best known example was the company’s now infamous 1984 ad. That said, even during their weak late 80s and early 90s period, the attacks continued:

And then there’s the company’s Mac and PC ads:

Like most things, Samsung has taken this concept off Apple and then begun churning out variations like sausages. Here’s one recent example:

So, like many things in the computer industry, the attack ad was first developed by a company like Commodore, was quickly followed by Apple, was mass-produced by Samsung, and then Microsoft eventually had a go.

And the big problem with their ad? Compared to the other examples, it’s a bit boring:

The moral of the story is simple. If you want to make an ad (or YouTube clip) attacking your rivals, go for it. Just make it interesting. Even if you have to make up a phrase like ‘blast processing’ to do it!