Many parenting apps are reinforcing the gender divide 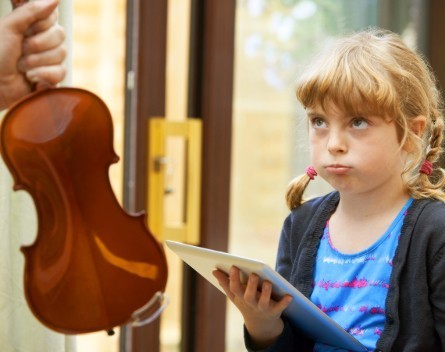 Almost every day, a smartphone app emerges offering some new and exciting functionality. But it’s come to my attention that many of these apps are continuing an old trend: they are purveyors of gender-based marketing.

So although in many ways we are making attempts to decrease the gender divide, it would seem that these new technologies are actually doing just the opposite.

Search through the list of apps on the market and it’s obvious that, while the responsibility of parenting is increasingly shared between partners, app developers continue to ignore this reality.

Compared to the hundreds of apps for pregnant women, very few apps are marketed to their partners (male or female).

Apps for mums and apps for dads

Many of these apps work to design a male partner’s role in pregnancy, in such a way that men are constructed as being barely capable of playing a supporting role and needing all the help they can get.

They typically include humorous, simplified information and reminders about what being a good partner involves. Together, these features render fathering an issue of keeping up appearances and impressing mum, rather than a serious attempt at engaging in parenting.

Another concern is that these apps may encourage men to monitor or survey their partners’ activities. Some apps suggest that partners should keep an eye on what their pregnant partner ingests for the sake of their baby’s health. The m Pregnancy – for Men with Pregnant Women app includes “information about what your partner cannot eat” and others include information on what activities their partners should avoid (such as heavy lifting).

This same app for fathers-to-be prides itself on its particular take on a common feature of pregnancy apps – the foetus size comparison. Rather than comparing the foetus to a piece of fruit or vegetable as many apps do, this app for Apple users describes the size of the developing baby “in terms that men understand e.g. similar to the size of a football, or a bottle of beer”.

These features are common to many support resources for men with pregnant partners (including apps, guidebooks and magazines). This suggests that although parenting and fathering appear to be changing in terms of policy, sociocultural practices and expectations – including more involved dads and more dads as primary carers – the mechanisms and devices to support these changes, including apps, are lagging behind.

My area of research is pregnancy and motherhood and apps offer a great many conveniences for pregnant women and new mums. They can help to keep track of particular activities, facilitate multitasking while breastfeeding and even sing your baby a calming lullaby.

What’s more, they provide tidbits of information that can be easily accessed on your smartphone, so you don’t have to trawl through a pregnancy guidebook for advice or facts.

But these apps harmfully perpetuate the notion that mothering is essentialised: part of a woman’s nature or instinct. If we continue to believe this, and if apps continue to promote the idea that men have no innate parental knowledge or intuition, then we will all suffer as a result.

Apps such as m Pregnancy and Android’s New Dad – Pregnancy For Dads also appeal to activities traditionally viewed as masculine – a gender-biased misconception in itself.

Apps for men provide information on how to prepare a nursery or how to deal with finance or insurance. This goes beyond pregnancy apps. Do a quick Google search for “apps for busy mums” and “apps for busy dads” and it’s easy to see that the marketing of apps to parents draws on numerous gender stereotypes.

This is common to almost every article in the vein of the best apps for mums. These tend to feature apps linked to a number of key ideas.

Second, the apps frequently reinforce misguided assumptions that the mother bears responsibility for household and family management. For instance, such apps might provide functionality for making to-do lists and shopping lists (Grocery Gadget), and offer advice on cooking (Emeals) and cleaning (Homeroutines and Tody).

Third, there are apps that focus on health, including Feeding Your Kids, Sudden Infant Death Syndrome apps (SIDS and Kids Safe Sleeping) and vaccination reminder apps.

Considering the wealth of research focusing on women’s responsibilities for their children’s health, it is not surprising that women are expected to use apps to supposedly ease the burden of responsibility.

In lists for the best apps for busy dads, there are other common themes. Almost always included in these are suggestions for ways in which dads can keep their children entertained.

What’s worrying is that most also include suggestions for keeping dad entertained, including sports apps and home renovation apps (such as the ESPN Score Centre and Home Depot apps).

When apps for housework were included, the screenshots almost always promote 1950s traditions – for example, dad taking out the rubbish and mum doing cooking and cleaning.

If apps are gendered, then it’s hardly a surprise to find many apps are targeted towards women improving their post-baby bodies and embracing their potential “yummy mummy” status.

Research has shown a woman’s relationship with her body can be bound to expectations to conform to dominant, commodified images of beauty. It’s no wonder apps present a new tool for marketing ideals of femininity.

I acknowledge that apps can be used to have fun or satisfy curiosity – is my baby the size of a peach or a rockmelon today? – but it is also clear that apps offer great potential for empowerment and the expansion of knowledge.

What I am suggesting is that app developers – and, even more importantly, those who are marketing new apps – should acknowledge the overlapping of technology and subjectivity.

There is a need to actively engage with the performative potential of apps in order to create technologies that encourage more equality in parenting and family life.

If app developers come to recognise this and make their apps more gender-neutral they may be able to reach a much broader market, and may actually begin to act as tools of learning, convenience and teamwork.

Sophia Johnson does not work for, consult to, own shares in or receive funding from any company or organisation that would benefit from this article, and has no relevant affiliations.