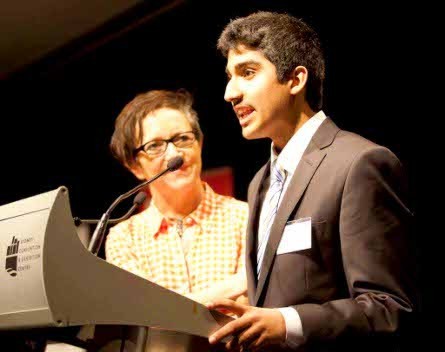 Like a lot of Year 12 students, Zeryab Cheema is not sure what he wants to study next year, unlike most of them he’s making up his mind while running a startup that already employs 30 people, both in Australia and overseas.

While his age might make his success rather unique, Cheema is already a seasoned entrepreneur having worked on his own startups since the age of 14.

His taxi mobile booking app Taxi 24/7 has just secured a deal with payments platform iZettle, a partnership that will allow the app to launch in the UK.

The app brings mobile, voice and GPS together, allowing people to deal directly with the nearest cab. The idea is that users of the app can speak directly to the drivers.

Cheema has been working on the iZettle deal when he gets home from school at 5pm until around 10pm every night, then waking up early in the morning to do his school homework. He spent the Easter break setting up a new company office and his Christmas break in the US speaking to potential partners.

But there’s a clear incentive – the iZettle partnership alone is potentially lucrative with the UK taxi industry representing over 700,000 drivers.

Cheema has insider knowledge advantage too with his dad having worked as a cab driver in the past.

“This is the first cornerstone which will allow us to leverage our success into other international markets including Germany, Spain and the Nordics,” Cheema says.

“Our aim is to equip at least a thousand drivers over the course of the coming 12 weeks with the reader through our roll-out of the pilot testing program.”

Cheema originally intended to first launch his app in Australia in partnership with PayPal, but delays to their mobile payments system locally meant he looked to overseas markets, though they will be launching here in May.

The app is already available in the US through a partnership with PayPal there.

The iZettle deal will make the solution available to UK drivers at a price individually tailored for each fleet.

Cheema says one of the unique benefits of Taxi 24/7 for drivers is that they were incentivized to use the app through a 3.5% commission on each transaction processed, which could amount to around £50 a week.

“Our focus is on getting drivers to use the app and getting passengers hooked on using it,” Cheema says.

He says the app will remain free to use with revenue coming from a 2% transaction fee. Originally they had planned to charge a small subscription fee on a monthly basis, but they had abandoned that model believing it would not scale.

Funding for Taxi 24/7 has all come from internal sources and Cheema says they were expecting $1 million though the government’s R&D incentive scheme.

Disruptive taxi apps have been a source of much contention for the taxi industry which is under threat from new players like Uber and Lyft.

Cheema is not too concerned though, saying his app is ready to be used by the luxury car market as well.