Microsoft rolls out Word, Excel and PowerPoint for Android smartphones 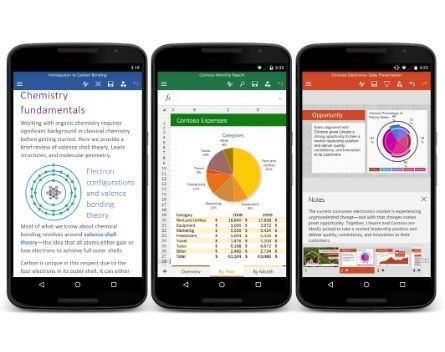 Android smartphone users will now be able to edit Excel spreadsheets and PowerPoint presentations on the go.

Microsoft has announced its Word, Excel and PowerPoint applications are now available on the Google Play store.

It is the first time the programs are available on Android smartphones, although Android tablets have had corresponding apps for some time.

The programs join the Microsoft Outlook app in allowing people to work solely from their smartphone.

Microsoft’s corporate vice president for office client applications, Kirk Koenigsbauer, said in a statement the rollout will complete the “Office experience” for millions of Android users around the world.

“We are so grateful to our preview users, and with their help we were able to test the apps on over 1900 different Android phone models in 83 countries,” he said.

“During the preview, we heard from thousands of these users, and over the last few weeks we were able to incorporate a lot of their feedback into the apps we’re launching today. For example, we made it easier to connect to other popular third-party storage offerings like Google Drive and Box, as well as many usability adjustments to make it easier to navigate commands within the apps.”

The launch of the Android apps follows a major restructure at Microsoft, with many senior executives departing the company.

At the time, chief executive Satya Nadella wrote in a memo that the reshuffle was done in order to better align the company’s structure with its long-term strategy.

“Success requires all of us – and particularly the senior leadership team – to work across boundaries as one Microsoft and in harmony with our partners,” he said.