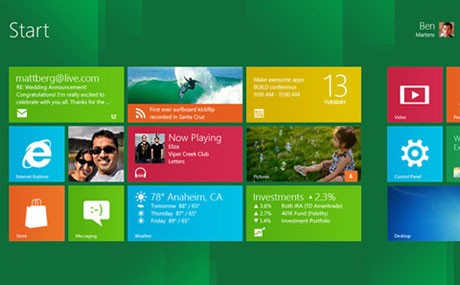 Software giant Microsoft has revealed its Windows 8 software to developers in a new preview build, as the company attempts to battle against both Google and Apple in both the desktop computer and smartphone categories.

Developers are specifically excited about the ability to create new apps for the software, with Microsoft to include an app store with the operating system similar to the store introduced by Apple earlier this year.

The trio of companies are not only competing with rival smartphone operating systems, but also with personal computers as Google prepares to push out its ChromeOS and Apple continues to break records with its Mac business.

The reaction to the software has been mostly positive, with developers appreciating that Microsoft is attempting to make its various consumer products – desktop software, the Xbox console and smartphones – use a similar type of interface.

Some of the major updates including a radically new user interface, similar to the Windows Phone model, a faster response time and the inclusion of a new app store for Windows, which has led to enthusiastic praise from developers.

Microsoft showed off the software at its Build conference, saying in an accompany blog post that “Windows 8 represents a reimaging of Windows from the chipset to the experience”.

“Since this is a week focused on developers, we also detailed the bold underpinning of the re-imagination of the Windows platform, tools and APIs.”

Some of the biggest changes include:

The reaction has been positive. Boy Genius Report has written that while Apple may have conquered the tablet market, Microsoft has taken a big leap with Windows 8, specifically with how it runs on a variety of devices.

“A tablet that can boot in under 10 seconds and fire up a full-scale version of Adobe Dreamweaver a few moments later. A tablet that can be slipped into a dock to instantly become a fully capable touch-enabled laptop computer. This is Microsoft’s vision with Windows 8, and this is what it will deliver.”

TechCrunch also mused over how Windows will play in the post-tablet world, stating that while it’s far too early to see how the new approach will play, “Microsoft made it abundantly clear that they don’t want the ‘post-PC era’ to mean this is a post-Microsoft era”.

Gizmodo wrote a glowing review of the developer build, stating that the “Metro” screen was flashy and easy to use.

“It’s not on par with the iPad (even the original version, to say nothing of the iPad 2). There are simply too many things that don’t work as they should. But it’s already far more usable than any Android tablet I’ve encountered.”

“This is, in fact, the first tablet other than an iPad I can see myself buying and using. It’s early, but Microsoft seems to have a hit.”

The Microsoft developer build of Windows 8 is available for download here. However, it stresses that this is for us by developers, and is not a final consumer product, therefore it should not be used as a person’s primary operating system.