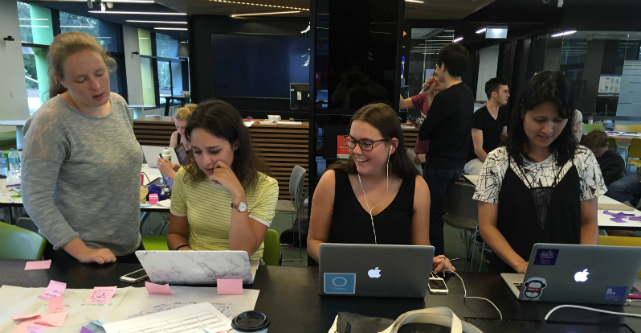 A hackathon has given university students the opportunity to come up with innovative ways to reduce world hunger and introduced the next generation of entrepreneurs to the world of startups.

The faculty of Science at Monash University held the event over the weekend, and Global Hunger Hack facilitator and entrepreneurship lecturer Erin Watson-Lynn says students were given the chance to launch a startup in collaboration with the wider community.

“Traditionally unis tend to operate within themselves,”  Watson-Lynn tells  StartupSmart.

At the hackathon more than 50 students were joined by young professionals from various industries to develop solutions to end hunger and achieve food security.

Watson-Lynn says that the event  aligned with working toward the UN’s Sustainable Development Goals.

“The purpose was to combine two of the most powerful agents of change, STEM and entrepreneurship, to support sustainable development goals,” she says.

To facilitate the process, the university partnered with external startup groups like BlueChilli and the Foundation for Young Australians so students could learn outside the traditional academic realm.

“It was about giving people the opportunity and space to come up with their ideas and get a taste of entrepreneurship,” Watson-Lynn says.

Student Elle Phillips who worked on Grow Your Own –  the community award winner – says the event has made her much more enthusiastic about entrepreneurship.

“The atmosphere and buzz in the room throughout the whole weekend was amazing,” Phillips says.

“I’m now just really excited to be able to hopefully launch this social enterprise sometime in the near future.”

Grow Your Own promotes modular gardening to prevent malnutrition in disadvantaged communities.

Student Isobel Campbell, who worked on Cricket Effect cupcakes, says their team made over $500 in pre-sales within 24 hours.

“It makes working on a startup all seem more achievable,” she says.

“Before, it just seemed like something other people do whereas now our team is planning our next steps.”

Fed Up won the innovation award for creating a platform to combat food waste by providing a place for people to share and find free food.

One of the prizes winners can now enjoy is free enrollment into BlueChilli’s online accelerator 99tolaunch, which is normally valued at nearly $900.

“I’m really hoping that these guys take the opportunity of the accelerators and see where that can lead them,” Watson-Lynn says.

As Monash University actively works toward rolling out student ideas and research to the broader community, Watson-Lynn says they will definitely run the hackathon again next year.

“It’s extremely purposeful for students in developing an entrepreneurial mindset,” she says.