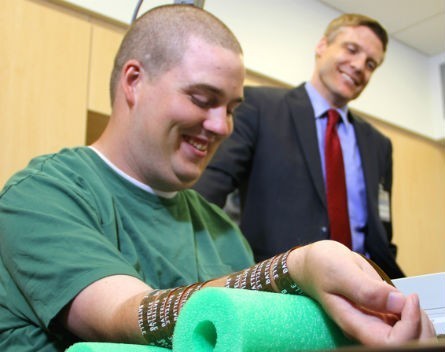 Don’t be mesmerised by cool apps and flashy new gizmos – the top technology inventions of the year are ones that will have a lasting effect.

Most are advances in fields that are already changing us. Some will have immediate impact; others are portents of transformations that may take decades to complete. In this vein, and in no particular order, here are what I consider to be ten of the best technological innovations from 2014.

Nanotechnology is a growing research field that manipulates materials on a molecular scale. One prospect is to transform medicine by injecting nanobots into the body where they perform functions such as treating disease.

In February, an Israeli team described devices they made from DNA and injected into cockroaches. By performing a kind of origami, the DNA nanobots assembled themselves and were able to control a molecule that targeted specific cells, so demonstrating their potential to carry out medical functions such as attacking cancers.

Nanotubes are large carbon molecules that form tubes with unusual thermal and electrical properties. In March, a team from MIT and CalTech published a method for inserting nanotubes into plant chloroplasts. The novel combination boosted photosynthesis and plant growth by several hundred percent.

Applications are still years away, but besides increasing plant growth and production, there are extraordinary possibilities: tapping plants for electrical power, building self-repairing materials and erecting buildings from materials that generate their own power.

The challenge they faced was blood’s viscosity: it not only impeded movement but also varied according to speed. They solved the problem by designing robots in the shape of scallops powered by an external magnetic field. These robots provide a starting point for many kinds of medical devices of the future.

4. A microchip helped a paralysed man regain the use of his arm

Implants are revolutionising the treatment of many medical conditions. In April, researchers at Ohio State University reported success in using a microchip implant to help a paralysed man regain use of his arm.

Ten years in development, the device, known as Neurobridge, stimulates muscles according to brain patterns. The innovation raises hopes for many disabled people. It showed that by plugging into our brainwaves we may one day control all manner of devices by thought alone.

Biotechnology is producing new cures for medical conditions long thought to be permanent. A medical team at Wroclaw Medical University cultured nerve cells taken from a patient’s nose and surgically inserted them into his spinal cord.

The transplanted cells stimulated severed nerve fibres to grow and rejoin, thus bridging a damaged section of the spinal column and allowing the patient to walk again. This innovation showed that damage to the nervous system can be reversed.

In August, Google used a drone to deliver chocolates to a farm in Outback Queensland. By year’s end, Amazon, DHL and many others were scrambling to establish unmanned delivery services in several countries.

7. A swarm of self-assembling mini-robots

Robots are already important tools in many industries, but put them into swarms and they can do so much more. In August the journal Science reported work at Harvard in which 1,000 mini-robots, the largest swarm so far, was able to assemble itself into programmed shapes.

There is still a long way to go, but it raised the potential for structures that self-assemble, which would revolutionise construction.

3D printing is now an established technology, but developments this year expanded its capabilities and applications. At the one extreme a team in Amsterdam began a project to build an entire house using 3D printing.

Meanwhile researchers at Princeton developed a 3D printer that could print with five different materials, incorporating dot-emitting diodes, and demonstrated it by making contact lenses. This raises many possibilities, from wearable video to monitoring the health of pilots.

9. The next frontier in space exploration

On November 12, it released the probe Philae which became the first spacecraft to land on a comet.

Necessity is the mother of invention, so the greater the need, the more important the invention. A worldwide need is the 780 million people around the world who lack access to clean water supplies. The challenge for inventors is to meet the World Health Organisation criteria for practical systems: accessible, simple and cheap.

One notable innovation this year was a portable new system called Sunflower developed in Switzerland. Easily transportable, it used sunlight to generate electricity, and at the same time provided heating, refrigeration for food and purified water.

What of next year? We can be sure that growing fields such as automation and nanotechnology will continue to surprise us. The US Patents Office granted more than 300,000 patents during 2013, nearly 30,000 more than 2012. If patents provide a reliable indicator, then new inventions are appearing faster than ever.