Netflix arrival will be a tipping point for TV in Australia 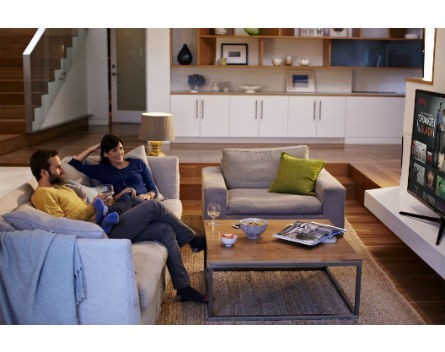 2015 will be an eventful, and testing, year for television in Australia.

It could be the year that we ask the fundamental question: what is television? A year where Australia rethinks its “free television” philosophy, that tests Australia’s technological infrastructure for its capability to shift toward a television culture encompassing the internet.

There are a number of factors that will impact television in Australia during 2015. These will include whether the growth in catch-up television continues on from 2014 and the continued roll-out of the National Broadband Network.

In addition to these, the largest impact will come from the new video-on-demand (VOD) services, including Presto, Stan. and Netflix.

But will subscription services such as these survive in Australia? This is a country that has only a 30% uptake of pay television, despite it being available for almost 20 years. This is far from the 1999 prediction of the Foxtel CEO Tom Mockridge, that within 10 years, pay TV would be installed in three-quarters of Australian homes.

Compare this to a report last year that:

Global pay-television penetration is forecast to exceed 57% by the end of 2014 and be above 70% of households in over 30 countries. Five countries will account for nearly two thirds of a forecast total of 886 million homes subscribing to television services.

The biggest change this year will come from the introduction of the new VOD services, each with their own idiosyncrasies.

Presto was the first of the three VOD services to launch in Australia. It is a joint venture between Channel Seven and Foxtel. It offers three different subscription packages: either movies or television separately for A$9.99 per month; or both for A$14.99 per month.

You can access content across a number of devices, including smart phones and tablets, and also stream to your television via Chromecast. The service allows for four devices to be linked with simultaneously streaming to two.

All of the content available on Presto is streamed at a standard definition resolution, requiring a minimum internet speed of at least 3Mbps.

Like Presto, Stan. is also a joint venture, including Channel Nine and Fairfax. Unlike Presto, Stan. has a single package, which includes all movies and television entertainment for A$10 per month.

Stan. also supports smartphones and tablets, although one key difference with Presto is the ability to stream content to your TV. It includes not only Chromecast, but you can also stream to AppleTV via AirPlay.

Stan. provides content up to a High Definition (HD) resolution of 1080p, where available. The appropriate format is automatically determined by your internet speed. The support page lists the minimum internet speed of 1.5Mbps, although for HD content the connection should be above 3.5Mbps for 720p and 6.5mbps for HD 1080p.

Netflix, which started in the US, is the only one of the three services to not have an Australian partner. However, there have been reports that Network Ten was in discussions prior to the launch. If this is true, this would provide all three Australian free-to-air commercial broadcasters a link with a VOD service and an additional outlet for content.

Whilst there is some speculation of the packages that will be available to Australian Netflix customers, it is yet to be officially announced. However, if the US packages are any indication, there could be some key differences between Netflix and the two other services.

Firstly, Netflix allows not only for HD streaming, but also Ultra HD 4K streaming. In the US, prices range from US$7.99 to US$11.99. The additional charges are based upon whether you want SD, HD or Ultra HD (4K), in addition to the number of simultaneous screens you wish to stream to.

Another point of difference with Netflix is its integration with smart TV manufactures, such as Samsung, LG, Sony, Panasonic, Philips and Hisense, which will have a Netflix app. The service is also integrated with Fetch TV and Apple TV, along with a number of gaming consoles.

What about the others?

Whilst it may appear these are new services available to Australians, this is in fact incorrect. One other streaming service, Quickflix commenced in 2003, although its initial business model was based upon a disc rental service. Since its introduction Quickflix has moved from its disc postage service to a streaming service. By the end of 2014 almost 70% of its customers had access to the streaming service.

Foxtel has strategically approached its attempt to lift subscriptions in two different ways. The first was lowering the entry point for Foxtel subscription to A$25 per month. The other move made by Foxtel has been its joint venture with the Seven Network to establish Presto.

With Netflix’s launch imminent, Presto and Stan. have been attempting to sweeten their deal to gain a foot hold in the Australian market.

Presto has announced a 30-day trial and is bundling the service with Telstra, including an app for the Telstra T-Box. Telstra mobile customers will also gain some benefits with a longer trial of up to three months. There is no coincidence that Foxtel has a share in both Presto and Telstra.

Stan. has also secured a deal with Vodafone, although the details are yet to be confirmed. In addition this could also see subscribers to Fairfax products also be offered exclusive deals for Stan subscriptions.

Netflix, on the other hand, has partnered with Optus and iiNet to offer customers unmetered usage of the VOD service.

While many of us are excited by the prospect of getting content at the same time as the US – or much sooner than we are used to – there are some things to be aware of. Firstly, choice is great, but some of us may find ourselves torn between the subscription services, as we review the catalogue on offer from each provider. If you want everything, you may need to subscribe to multiple services.

The second point is that for each of the three subscription services, it is up to you to supply your own device/s and internet connection. The key devices focused on by these streaming services are smartphones, tablets and PCs, not a traditional television set. If you want to watch them on your TV, you need something to stream them.

According to the Australian Multiscreen Report for 2014, the penetration rate of smart phones is 74% for people aged 16 and above, which has increased almost 30% from 2011.

Tablet ownership is currently at 45%, although this figure is more than double that of 2012. The percentage of Australians with internet access is currently around 80%, which has only increased 4% from 2011.

The other key component to make any of these streaming services is the internet, both in terms of speed and access. Currently Australia is ranked 40th in the world for internet speed, with only 14% of the connections above 10Mbps.

When analysing a connection speed of 15Mbps or above – which is required for streaming at 4K – we are ranked 36th; less than 6% of Australian internet connections being of the equivalent or above. This means most Australians won’t be able to watch UltraHD via Netflix, which suggests a 25Mbps connection.

This year could see a big change in the way we watch television. However, watching TV will also become more complicated. No longer will it be as easy as purchasing a television set and connecting an antenna.

TV will soon require various communication and media technologies to come together, including internet service providers, broadcasters (both old and new) and technology manufacturers.

In addition, the biggest determinant of success for internet television and VOD services will be the Australian public. After more than 60 years of free television, how many Australians will incorporate a subscription video service into their television viewing?

These questions are likely to begin to be answered in 2015 as we transition from traditional broadcast TV to the new era of streaming and video-on-demand viewing.