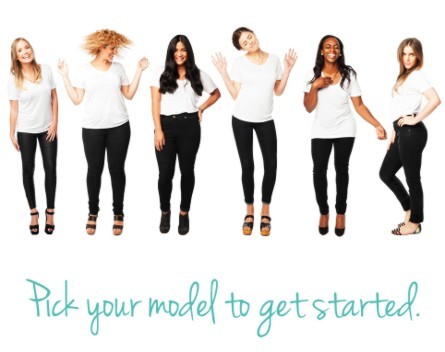 A new Australian shopping site has entered uncharted territory by using images of six real-life women to show how clothes will look on different body shapes.

Sizeable.com.au was launched by Melburnian Larissa Thorne last week. The site is run by a small team – just Thorne and a few others who are helping her “out of the kindness of their hearts” – but it has big ambitions to change the way retailers present their clothes online.

Sizeable lets shoppers choose between six women – Rosie, Lucy, Jess, Andrea, Sherena and Susan –based on their body shapes and measurements. The site also offers measurements for each size of clothing listed.

Thorne told SmartCompany the idea of using real women on the site was a “no-brainer”. “When I first thought of it, I couldn’t believe no one else was doing it,” she says.

All the models are friends of Thorne’s and they were chosen because of their “beautiful body shapes and because they photograph well,” she says.

Thorne was inspired by her own disappointing experiences shopping online, ordering clothes online only to receive them in the mail and have them not fit.

“It’s impossible to estimate how clothes will fit based on the standard, six-foot, size-eight model,” says Thorne. “I was looking for someone a little bit more like me.”

While Thorne says some online retailers do use ‘real women’ instead of fashion models to display their clothes, it is often only done for plus-size clothing lines.

“People almost forget that there are not just two types of body shapes,” she says.

And Thorne says it is one thing to have regular-sized models, but it’s another to provide the actual measurements for the items of clothing. She says the sites that do indicate measurements usually do so for just one size and it is then difficult to judge how the measurements will increase as the size of the clothes increases.

Thorne says it would be “great if everyone did it” and followed her example. “But I guess someone has to be the first,” she says.

“It’s another example of trying to personalise and customise online retail,” he says.