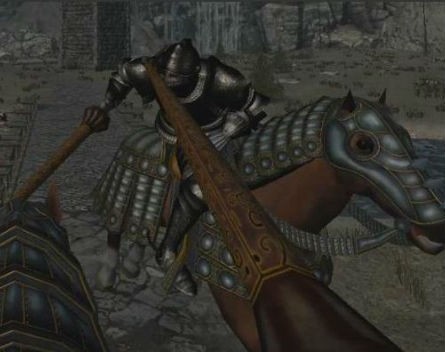 The game’s demo was released recently and allows up to 16 players to take part in knight-on-knight combat. It currently has the highest average user rating on the Oculus Share platform at 4.9 out of 5.

Offpeak Games co-founders Liam Poli and Christopher Parkin began work on the game back in April. Fans of TaleWorld’s popular medieval action role-playing game Mount and Blade, which was released on PC in 2008, the duo thought mounted combat would be perfect for the Oculus platform.

“We’re basically just a couple of tech enthusiasts, who saw Oculus, heard about it, bought it and tried it, and thought oh wow this is amazing,” Parkin says.

“Me and Liam play Mount and Blade all the time. We thought riding a horse with the lance, it would probably work really well with Oculus Rift. For the same reason lots of Oculus games are car games or space flight. (When you use Oculus) you’re sitting with something, looking around facing forward, just as you would on a horse.”

Parkin, who’s working full-time on the project, and Poli are both developers, but have never worked on a game before. The Oculus has presented with them with some interesting challenges during development.

“We had everything working for PC, it all worked on the flat screen, but when we moved it to Oculus, all of a sudden you had scale and depth and you felt like you were riding these miniature horses. It felt like you were one foot tall,” he says with a laugh.

“Even now, scale is tricky. Now you’re like a three metre tall person riding a four metre horse. But it just feels right, so I guess that’s the challenge.”

Offpeak Games is running a campaign to get Valiant approved on Steam Greenlight, which allows people to vote for new games to be released on Steam, Valve’s popular game distribution platform.

Parkin says Offpeak is hoping to get the 5000 votes needed to be approved by early next year, so they can release Valiant as an early access game. So far it’s received around 1000 votes. They’re taking the early access route, which involves asking customers to pay for an unfinished version of the game that’s progressively updated, because there are very few multiplayer games currently available for the Oculus.

“We’re planning to do early access as soon as we can, which will probably fall around February or March, and it would run until either we were happy to push a final product out, or shortly before the consumer version of Oculus Rift is launched,” Parkin says.

“The only thing with early access is it has the reputation of sometimes being a hit and run. So people can be wary. But people are desperate for content and we want to be able to provide it.”

Parkin and Poli have bootstrapped the startup, but aren’t against the idea of bringing an investor with experience in the games industry on board. With the goal of launching a completed version of Valiant in November next year, Parkin says the biggest challenge will be staying ahead of any potential competition.

“We really need to be able to scale the game and build it quick enough before competing startups show up in the market,” he says.

To vote for Valiant, you can head over to the game’s Steam Greenlight page.