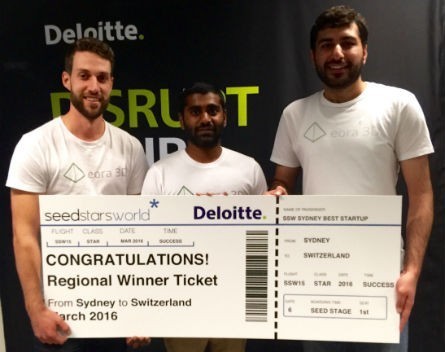 When faced with a $20,000 bill to create a 3D scan of a product, Rahul Koduri, Richard Boers and Asfand Khan set out to build a cheaper and easier alternative.

The trio behind Eora3D were announced as the winners of Seedstars Sydney over the weekend, and will now be flown to Switzerland at the start of next year to compete for up to $500,000 worth of investments against 54 other international winners

Seedstars is a global pitching competition, and Saturday marked the third time it has come to Sydney. The 12 selected finalists pitched to a panel of judges over the weekend.

To be eligible, the startups had to be less than two years old, have an MVP available, and have received no more than $US500,000 in funding.

Eora3D co-founder Rahul Koduri says they were asked some hard questions as part of the competition.

“It was a tough crowd to please,” Koduri says.

“When you’re a seed-stage startup, you’re pretty good at pitching, but you’re not so sure what kind of questions you’ll get.”

3D printing powered by your smartphone

Eora3D allows user to digitise a physical object into a 3D model through a smartphone app.

“It’s just like taking a video,” Koduri says. “You hit record, leave it for three to five minutes and a 3D model will appear on the screen.”

“It’s competitively priced and it appeals to an industry market and as well as a novel market. The reason the judges decided to choose Eora was mainly its global potential, as well as the pitch, team, valuation, scalability, and uniqueness.”

On the hunt for investment

Last year’s winner, car-monitoring startup GoFar, recently ran a succesful crowdfunding campaign, raising more than $200,000 to help get the product out into the market.

The Eora3D founders have so far bootstrapped the startup themselves, but are now on the hunt for outside investors following the success at Seedstars Sydney. They’ll also be launching a Kickstarter campaign in September.

The Seedstars event is beneficial for all involved, Arthur says.

“It’s a really good experience not just for the startups, but for the audience members,” he says.

“They may feel like the barrier to entry is quite high, when really it isn’t, they just have to get out there and hustle.”

Arthur hopes this event will drive others to put on similar ones.

“We need more vehicles like these to help local startups have the stage to present their ideas. Seedstars is a global stage, so they have global opportunities,” he says.