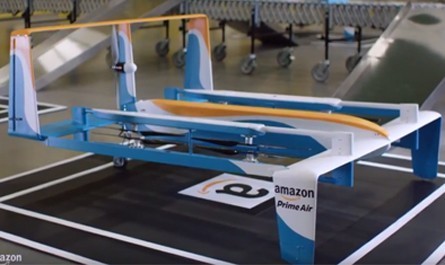 The online retailer today released a video featuring its updated Prime Air drone, and it’s a markedly different creation to the prototype it debuted two years ago.

While some features remain the same – the new drone still takes off vertically like a helicopter – it’s now a sleeker looking aircraft that can fly horizontally, meaning it should be able to transport packages much more quickly.

Sense-and-avoid technology will stop the drone colliding with other objects, and also allow it to scope out a safe drop zone, with the video showing one shopper leaving an Amazon logo in her front yard where the parcel is neatly laid down.

The video is hosted by former Top Gear host Jeremy Clarkson, who tells viewers Amazon are developing a whole range of drones for different environments, some of which have the ability to fly 15 miles and deliver packages in less than 30 minutes.

There’s no indication in the video when the drones might take flight but whatever the start date, Prime Air will have to co-operate with the US Federal Aviation Administration’s forthcoming drone regulations before its fleet can go up, up and away.