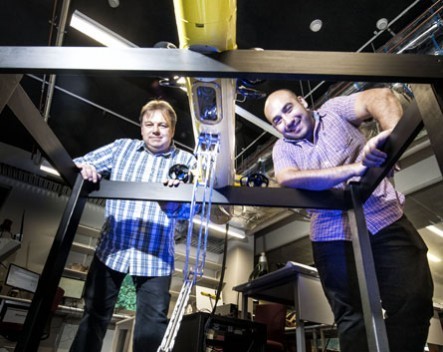 An underwater robot will soon be deployed to save the Great Barrier Reef by hunting down an invasive starfish species and injecting it with poison.

The COTSbot (Crown of Thorns Sea Star) has one mission in life: to hunt down and destroy the destructive starfish that is eating the reef’s coral. And it’s damn good at it too.

In what we’re pretty sure is something inspired by a killing machine from a dystopian sci-fi film, some clever people at QUT have developed an unmanned robot equipped with a pneumatic injecting arm that can apparently take out 200 starfish in an eight-hour period.

Using robotic vision, classification algorithms and armed with stereoscopic cameras, five thrusters and GPS, COTSbot can detect the pesky sea creature and injects it with a lethal dose of poison.

Dr Matthew Dunbabin from QUT’s Institute for Future Environments, says he and fellow creator Feras Dayoub came up with the idea for the starfish-killing robot nearly ten years ago, and had to wait for the technology to catch up.

“We first developed a vision system to count this type of starfish, and at the time we considered building a robot but that was technically impossible then,” Dunbabin says.

The poison used to kill the crown of thorns starfish has also been vastly improved, with it now only taking one shot instead of ten.

Divers are already using it to kill the starfish, but COTSbot is much more efficient.

“That makes it more feasible for the robot to hit the target once to give it the injection,” he says.

“It’s a very clever robotic tool that can be a force multiplier and assist divers.”

COTSbot’s trademark weapon leads to some pretty brutal effects on its starfish victims, including “discoloured and necrotic skin”, “loss of spines” and “large, open sores that expose the internal organs”.

But before you feel too sorry for the crown of thorns, Dunbabin points out that it’s a serious threat to the existence of the Great Barrier Reef.

“It’s very topical and quite a significant problem on the Great Barrier Reef at the moment,” he says. “Of all the coral decline, 40% is due to this type of starfish, and that’s only beaten by cyclones.”

“These starfish kill the coral and eat the coral.”

The team at QUT has been training the robot for months by showing it pictures of the bad starfish and pictures of other things so it can learn what it’s meant to be targeting through an algorithm.

It’s been looking at its future victim for months, and soon the little robot hitman will be let loose in the Great Barrier Reef.

The trials will be a proof-of-concept test, with humans initially pressing the trigger every time, before eventually handing total control to the robot.

Dunbabin stresses that the robot is very safe, and there are precautions in place to prevent ii from attacking other sea creatures or indeed people.

“It’s designed to only detect COTS, and if there’s any doubt at all then it won’t inject,” Dunbabin says.

“It’s incredibly safe, we trust our systems,” he says.

“Over the next few months it’ll start having more and more autonomy as it validates the algorithms.”

The team is on the hunt for some funding to scale up manufacturing and deployment of the robot.

To ease the mind of any investors who have watched those dystopian sci fi films, Dunbabin has reassured us that COTSbot won’t be turning on its human creators anytime soon.