Robots in the classroom: Meet Edison, the Australian-designed Lego-compatible robot that smashed its crowdfunding target 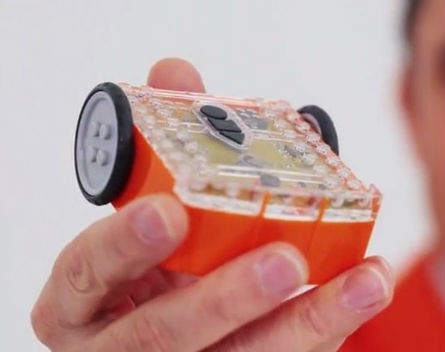 An Adelaide company behind a low-cost robot called Edison has raised $83,256 from 928 backers, smashing its $20,000 target with five days to spare, while drawing strong interest from teachers and hobbyists alike.

MicroBrics managing director Brenton O’Brien says the robots will sell for $39 each or $30 each for a classroom of 30 once they enter into full production in December.

“Edison is a low-cost, Lego-compatible programmable robot. And what makes it really impressive is the price point – existing Lego Technic robotics kits can cost around $500 each. Edison uses clever engineering and production techniques to keep the costs down,” O’Brien says.

“You can drive it around like any other robot, it’s easy to use, affordable and really simple. You can program it on a computer by putting together a string of pictures telling the robot what to do.”

Edison came about from a previous product O’Brien developed, a solder-free electronic construction system with interchangeable modules called MicroBrics, which won the People’s Choice Award on the ABC program The New Investors in in 2004.

To demonstrate the flexibility of the MicroBrics system, O’Brien used to build robots only to find people, and kids in particular, were more interested in the robots than the blocks they were made of.

Aside from being able to be programmed through a graphical programming language called EdWare for Mac, Windows or Linux, Edison can also be controlled through a standard TV or DVD remote or by activating commands by driving over barcodes.

O’Brien anticipates demand both from hobbyists and the education market.

“A $500 robotics kit is a very risky investment for a parent to see if their kid is interested in robots, and Edison comes in at a price point that’s a lot more reasonable.”

“For kids, robots are fascinating and they get really engage with learning through them. Unlike memorising a textbook and regurgitating information, kids actually want to learn and experiment with robots… Now, half the job of a teacher is to get the kids to engage with learning, and they know Edison can help them to do that.”

“But they’re not just learning about robotics. They learn about maths, programming, general science concepts such as sensors – even English if teachers get them to write reports about what they’ve gotten their robots to do.”

O’Brien likens the experience of kids playing with robots to when his Dad taking him to the local Dick Smith Electronics Store, which he says helped spark his interest in electronics.

“The exciting thing is the robotics industry hasn’t produced its Model T Ford yet, to use a car-related metaphor. The people who will come up with those inventions are in school now – or not even born yet. So it’s about inspiring them to get interested.”

It comes at a time when interest in robotics is booming, with hundreds of participants taking part in NodeBots Day events across the country last month.