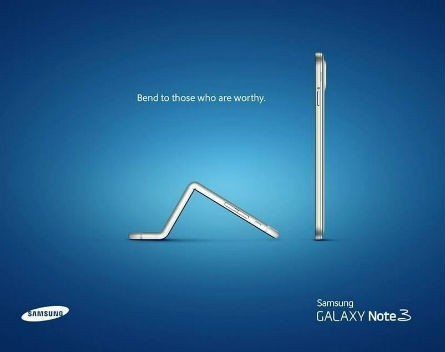 Apple’s rivals have been quick to take advantage of its ongoing social media attention this week. Not only have they been able to promote their own products but as the focus remains on Apple’s, issues with their own products go unnoticed by the social and news media.

Apple issued an apology over its update to iOS 8 that left users without the ability to make or receive calls and broke the touch sensor functionality. Users were advised to roll back the upgrade and Apple worked hard to issue a fix.

At the same time, Apple has come out and defended the design of its iPhone 6 Plus saying that only 9 phones so far have been reported as having suffered any bending problems. #Bendgate as the social phenomenon has been dubbed broke onto the scene when users reported that the iPhone 6 Plus was bending after having been in their front trouser pockets. Tech video blogger Lewis Hilsenteger posted a video demonstrating that it was “relatively” easy to bend the iPhone 6 Plus whereas this was not possible with other phones like the HTC One M8, Moto X, Nokia Lumia and indeed the smaller iPhone 6 or iPhone 5S.

Numerous vendors have lost no time to capitalise on the social element of Apple’s misfortunes with LG, Samsung, Nokia, Lenovo and even Nestle’s KitKat promoting their products on the back of it.

Samsung’s (and others’) own problems go unnoticed

At the same time however, Samsung has been quietly fixing its own major glitches. A week ago, Samsung updated its software that allows its phones to control and communicate with its smartwatches. The software update kept crashing rendering the watches unusable in some cases. The only recourse for hundreds of angry users in this case was to leave bad reviews.

Although Samsung eventually fixed the problem, 3 days later, there was no apology or even an acknowledgement that there had been an issue, not even to the customers that had just bought a watch and been unable to use it out of the box. This problem received no news articles in the press. One can only imagine what would have happened if this had been Apple.

In other examples of companies getting a pass when it comes to failing upgrades, Microsoft has had a long history of having to deal with updates that cause its users problems including system crashes. The latest was a month ago where Microsoft removed an update after users reported crashing machines.

The list goes on as it is a fact of life that software and hardware will have problems that only surface after they get into the hands of consumers. The car industry in particular has had an escalating number of recalls of vehicles to fix problems as they have come to realise that not fixing issues quickly can lead to people being injured or dying. US manufacturer Chrysler has last month recalled 349,000 cars with faulty ignition switches. Ignition switch problems in other cars have been linked to 13 deaths in the US. So far this year, 23 million cars will have been recalled to fix a variety of safety and other issues.

The attention focussed on Apple and its glitches is unprecedented and reflects its status of a brand which creates very strong loyalties and emotions amongst both its customers and detractors. The benefit that this gives other companies like Samsung is that whilst the spotlight is focused on Apple, few people are paying attention to its own problems adding insult to Apple’s injuries.