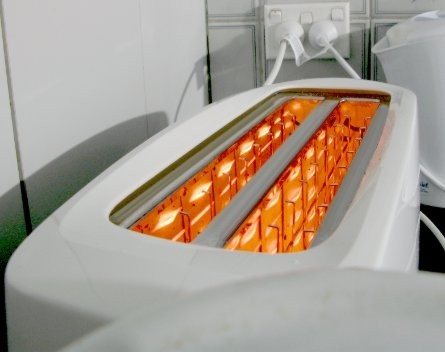 The lingering smell of burnt toast in the morning may soon be a distant memory.

Three Adelaide experimental physicists have developed an optical sensing technology that determines when toast is ready based on its colour, rather than how long it’s been in the toaster.

The trio’s company SensAbility has received $50,000 from the South Australian state government on top of their own contribution of $25,000 to further develop their product.

Co-founder Dr Sean Manning told StartupSmart the idea for a sensor to determine when toast is ready based on what it looks like came about three years ago when he and fellow founders Dr Andrew Richardson and Dr Kristopher Rowland shared an office at Adelaide University’s Institute for Photonics and Advanced Sensing.

He says Richardson was frustrated that his landlady would freeze her bread, meaning it took longer to toast, and causing his own bread to burn when he then used the toaster.

They came up with their optical sensing solution after discussing how some people would arrive at complex solutions to problems when in fact simple answers were often the best.

“It simply measures how brown it (toast) is,” Manning says.

He says they tested the idea in the lab using the high tech equipment at their disposal, with colleagues laughingly calling it the $100,000 toaster.

They built a number of prototypes and are now working with an engineering company on their third generation prototype.

Manning stresses they aren’t out to manufacture a new toaster themselves, but are building the technology that appliance making giants can incorporate in their own machines.

“The beauty of the technology is it’s completely agnostic,” he says, “it’s basically adding a brain to a toaster.”

Manning says he and his co-founders were not really prepared for what to expect when launching their start-up, and have rapidly learnt when to tap people for expertise they don’t have, such as advice on legal and patent issues.

“Find expertise and ask around,” he advises others starting up their own businesses.

“If you get a bad vibe from someone, it’s probably right. Especially if you walk away not understanding something.”