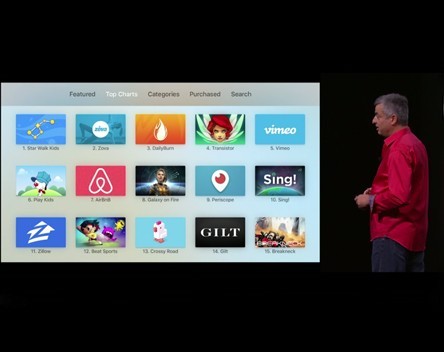 Endless arcade game Crossy Road and fitness app Zova are both launch partners for the new Apple TV App Store, which will feature on the fourth generation TV announced at the event.

The Aussie apps will be available for purchase and use on the new Apple TV, which doesn’t have an official launch date yet

Crossy Road is made by Melbourne-based startup Hipster Whale, and co-founder Andy Sum demoed the app on stage.

“As a small indie studio from Melbourne we’re thrilled to be able to bring our game to the living room,” Sum said at the launch.

“We’re super excited to be here today to show all of you just how fun it is to play Crossy Road on the Apple TV.”

Crossy Road was launched in 2014 and has now been downloaded over 40 million times through the App Store and recently received an Apple design award.

Sum also announced a new multiplayer version of the game on stage, making use of the new Siri remote control and the ability to use an iPhone as a controller as well.

“Every day we hear stories of players laughing together with Crossy Road, so today exclusively on the new Apple TV we’re announcing multiplayer,” Sum said.

“Now you can truly play Crossy Road with family and friends.”