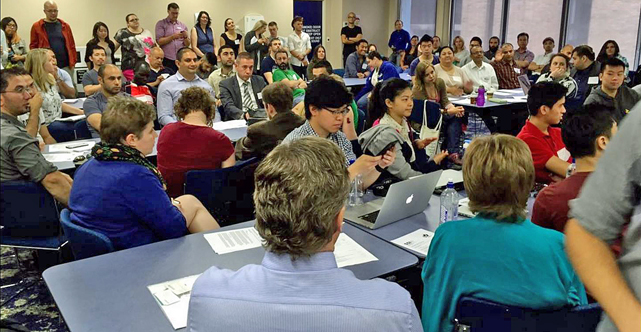 The Melbourne tech and startup sectors will be uniting in April to come up with innovative new ways to help refugees settle in the community.

The Techfugees hackathon follows a similar event in Sydney in November last year that saw 150 founders, entrepreneurs, developers and investors team up with NGOs and refugees to formulate new ideas and startups.

Angel investor and former refugee Shelli Trung is organising the event in conjunction with the Sydney team, and says Melbourne is the ideal city to hold it.

“We obviously have one of the most successful implementations and settlements of refugees and migrants in Australia and we’re known for being one of the most welcoming cities in the world.

“It’s obviously the right place to do it.”

Ideas from the Sydney event included an app to help refugees manages goals and objectives, translation tools and a platform to curate local businesses and services.

While the enthusiasm from the local tech community has been instant, Trung says the not-for-profits are yet to get on board.

“Pretty much every tech organisations has said yes and that’s fantastic,” she says.

“We’ve had the easiest time when it comes to the tech community but unfortunately the NGOs have been a bit slow and that’s been frustrating for us. We really want them to be involved.”

The Sydney Techfugees event was sponsored by Settlement Services International and STARTTS and Trung says it’s crucial that refugees are actually brought into the process in Melbourne and participate in the hackathon.

“I’ve gone to a lot of events aiming to help refugees where refugees are not in attendance – but in Sydney they were front and centre and a part of hacking the solution,” she says.

“That was paramount to how successful it was.”

While the NGOs may have been slow on the uptake, a number of bigger organisations will be sponsoring the event, including the Telstra Foundation, AWS and Dropbox.

Trung says it’s important for refugees to see that the community cares and is trying to help them settle in Australia.

“The tech community is fantastic at getting behind a social cause,” she says.

“If we wait for government to do something they’ll still be debating and the tech community would’ve already developed a solution.

“The tech community just gets it done. It’s an amazing way to show refugees and migrants that you don’t have to wait for the government to actually give you the services – you can learn skills online for free.

“I want to introduce them to the community, for them to come in and see how progressive, inclusive and diverse the tech community is.”

The Melbourne Techfugees event will be taking place from April 15th – 17th at LaunchPad in Richmond. You can register here.