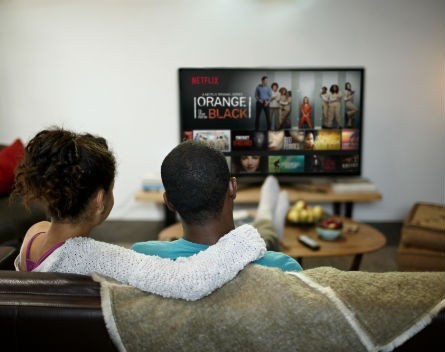 Netflix will launch in Australia and New Zealand in March next year. Expectations are this is just the start of an influx of new streaming options in Australia.

The internet and television are increasingly intertwined. It is expected that 30% of televisions globally will be connected to the internet by 2018. In Australia, this figure was surpassed last year with a third of Australians already using a television with internet capability.

However, people are also increasingly tuning in to traditional broadcast television stations. According to research, Australians watch television eight times more than video content on other devices.

Australians are watching on average just over three hours of TV per day on in-home TV sets. For the first quarter of this year, Australians watched 37 minutes more television than they did a year ago. This figure is not decreasing even as options for accessing TV and other video content expand dramatically.

These statistics underlie why companies are clearly still willing to invest in free-to-air television. News Corp is just one. Chairman Rupert Murdoch says Foxtel and United States group Discovery Communications are among the bidders looking to buy a 14.9% stake in the Ten Network.

Other companies tipped to have placed offers include Time Warner, Fairfax and US private equity firm Providence.

Whether a bid is successful rests on approval from the larger stakeholders in the company. These include regional television giant Bruce Gordon, Gina Rinehart, James Packer and Lachlan Murdoch.

Gordon is the largest shareholder in Ten with a 14.9% share of the company. He is also the owner of WIN Corporation. Gordon has recently said:

“Ten should still stay as an Australian-owned operation and it should not be sold to any of these giant US pay-TV set-ups.”

This may make it difficult to strike a deal with an international company.

While it is still unclear whether a deal will eventuate, reports place the Foxtel and Discovery Communications joint proposal as the best prospect. This may be due to Ten’s recent announcement of a joint project with Foxtel to create an Australia version of the United Kingdom program GoggleBox. The program captures people’s reactions as they watch television in their homes.

The project is interesting as it may indicate a future broadcasting model. GoggleBox will premiere on Foxtel and screen on Ten the following night. Currently, many high-rating programs from the United States or United Kingdom are delayed. This is a cause of frustration for Australians and is considered one of the reasons for our high levels of television piracy.

Australian television broadcasters are not only competing with each other, but also with new digital players.

Fairfax Digital offers a television service through its SMH TV and Age TV offering. In the United States, multichannel network Maker Studios launched its Maker.tv service, which Disney purchased for US$950 million.

Seven and Nine have already moved towards establishing streaming services in addition to their catch-up television offering. Stan.com.au is a joint venture between Nine and Fairfax which streams online TV programs and movies. Seven is rumoured to be liaising also with Foxtel to launch its own video streaming service.

The direction that Ten may take in this area is unclear. Its previous joint venture with Village Roadshow, Village Ten Online, went into receivership only months after its launch in 1999.

The Australian government is likely to support any move to online by Australian broadcasters. Communications Minister Malcolm Turnbull recently announced his plan to move community television online, arguing this was the future of television.

A move to online television may also assist the government with the public’s perception of the NBN. For a streaming service to be successful, the technology needs to be adequate. The NBN will allow greater data and therefore better online visuals.

However, the government may need to reconsider Australia’s broadcast laws and the way in which television broadcasters are defined. Whether new digital content is to be defined as television is yet to be answered.

It clear that television is far from dead. There are more opportunities for traditional broadcasters to leverage their offering into the digital space. However, television needs to move quickly or be overtaken by new foreign streaming players.

Marc C-Scott does not work for, consult to, own shares in or receive funding from any company or organisation that would benefit from this article, and has no relevant affiliations.