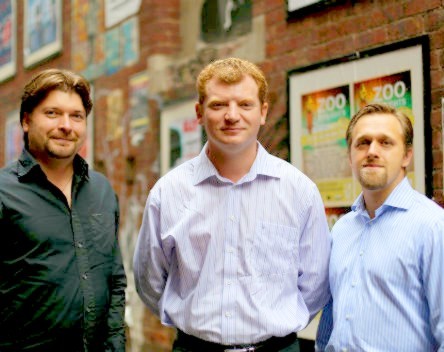 Google designed a car without a steering wheel, and now Australian startup KISA has released a phone without a screen or keypad.

As smartphones become more and more advanced, they become increasingly inaccessible to the elderly and those with disabilities, KISA phone co-founder Dmitry Levin says.

Levin and his fellow co-founders Dennis Volodomanov and Leon Kosher founded KISA in the middle of last year, after watching family members struggle to use smartphones.

The KISA phone, which launched last Friday, looks like a bulky, less sleek iPhone and features only the most absolutely necessary buttons, contact buttons, on/off, volume, and a SOS button for emergency calls.

Users choose up to 10 dedicated contact buttons which are pre-programmed when they purchase the phone. If one needs to be changed, then this can be done remotely by the KISA phone support team.

The phone is designed to be as light as possible to ensure it’s not cumbersome to use and not dangerous when dropped.

“This is a purpose designed and built device, it’s not for everyone, but it’s designed specifically for the needs of certain people,” he says.

“Even the simplest mobile phones on the market assume something about the user; they assume that they already know how to or are capable of using digital menus, touch screen interfaces, audio commands, or even at the most basic level, they assume the user can read.

“We set out to make a mobile phone that assumes close to nothing.”

While work is being done to make smartphones and communication gadgets as accessible as possible, Levin says there will always be a market for a phone like KISA.

“As humans our ability to deal with new technology diminishes over time,” he says.

“Technology moves on and it makes it easier, but it doesn’t take the fear of technology. For people that are afraid of tech, no matter what you do, if it looks complex it won’t work.”

The phone has been heavily tested, and designed with extensive consultation with Vision Australia and Guide Dogs Victoria.

Levin recalls the experience of one tester which he believes illustrates the value of the KISA phone.

“One of our first testers, she did not know anything about the device, it was given to her, we weren’t present there, but we were told when she was presented with the box, she was disappointed, she thought it was another smartphone,” he says.

“When she opened it her face lit up, and she said I know what this is and I know to how to use it.”

Testers of the phone had difficulty using a regular cable charger, and as a consequence the KISA team developed a cradle charger to make powering-up as easy as possible.

KISA will also be offering what co-founder it says are the simplest mobile phone plans available in Australia, with no lock in contracts, and easy to understand terms.

Levin says KISA has been approached by investors, but plan to continue without investment for as long as possible.

“We believe in it enough to fund it ourselves,” he says.