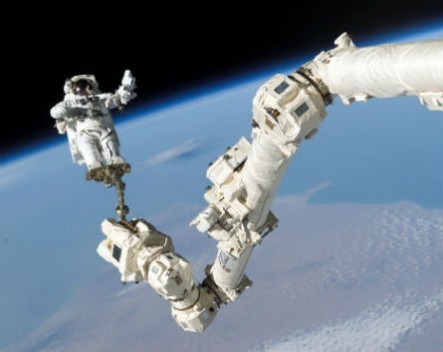 The concept and use of 3D printing is now well established, with a large selection of printers available today, ranging from your low-price small 3D units for home to the larger and more robust industrial printers.

The technology itself has also evolved and is now being implemented in a vast range of industries from food to automotive, aerospace, construction, health and many others.

There are still a few things holding back 3D printing from any mass production over other manufacturing methods, but it is the technology’s application beyond Earth that it is showing real promise.

The printer, developed by Made In Space, was built under a joint partnership with NASA’s Marshall Space Flight Center and was launched in September 2014.

The need to keep an on-going supply chain from Earth to the space mission makes space development expensive and slow. 3D printers in space allow astronauts to manufacture what they need on-site and on-demand. The ISS astronauts demonstrated this when they 3D-printed 14 objects – including a wrench – and sent them back to Earth for testing.

Made In Space developed 3D printing technology that is able to function in an environment with micro-gravity, similar to the one on the ISS. The company’s first printer is a prototype that uses ABS plastic material and has a relatively small work envelope (5cm by 10cm by 5cm).

NASA is also investigating 3D printing in space for future exploration missions. It is currently developing 3D-printers that could use the grit that blows across the surface of Mars to make bricks to build shelters. It is experimenting on Earth with materials similar to Martian sand as ink to 3D-print building structures.

The European Space Agency (ESA) is also conducting research for a mission to the moon using lunar dust as an ink to attempt to 3D-print an entire moon base. It is already able to print out stone-like building blocks weighing 1.5 tonnes each.

3D printing is also being used to manufacture rockets to take astronauts on their missions. New Zealand-based company Rocket Lab this year unveiled plans to reduce the average launch costs by 95% by using 3D printing for all primary components of their engine.

The parts are 3D-printed using titanium alloys and can be manufactured withing days, instead of months using conventional manufacturing techniques.

If 3D printing wasn’t enough, 4D-printing was introduced at a TED Conference in 2013 by Skylar Tibbits, director of MIT’s Self-Assembly Lab.

He described 4D printed objects as 3D-printed objects that reshape themselves or self-assemble over time, depending on the environment they’re in. In other words, the 4th dimension is time and/or environmental conditions.

The technology is of particular interest to the oil and gas industry. Tibbits is said to be working with US company GEOSyntec to design 4D printed water pipes. As the scale and reach of the technology increases, applications in the military and construction industries are likely to emerge.

Dr Dan Raviv, postdoctoral fellow at MIT, believes that 4D printing may be used in a wide range of applications such as home appliances, childcare products, or even clothes and footwear that optimise their form and function by reacting to changes in the environment.

4D printing is also making its way into fashion, albeit with a slightly different definition. In this case, it is described as making something in one shape which then unfolds into another.

New York’s Museum of Modern Art (MoMA) recently acquired such a 4D-printed dress which designers were able to print using a powder-based nylon material, and made the dress out of thousands of interlocking pieces.

The pace at which 3D printing has evolved in various industries is astonishing. But the technology is still too slow for mass manufacturing and accuracy must still be improved for fabrication of structural components.

As was noted before, high expectations may have caused 3D printing to be over-hyped. It still remains for specialists and technically proficient professionals only.

The power to offer customised products that are manufactured closer to their point of consumption certainly makes the technology appealing to both providers and consumers. It’s a growing market, but there’s still a lot work to be done – particularly around process speed, product size, and most importantly, the variety of materials that can be used with the technology – but it certainly looks quite promising.

In the near future, we may very well see 4D printing used in space. Imagine if an improved 3D printing process using materials that could self-assemble was used to fabricate components on-site and on-demand for astronauts during a space mission.

After arriving at their destination, raw material from the alien world could be used in the additive manufacturing process to construct shelter, buildings and manufacture parts as needed. This also removes the need to carry all the heavy building materials with us to another planet.

So 3D, and 4D, printing have a bright future, both here on Earth and in space.