The psychology of Apple fans: Blind loyalty or just wanting to belong? 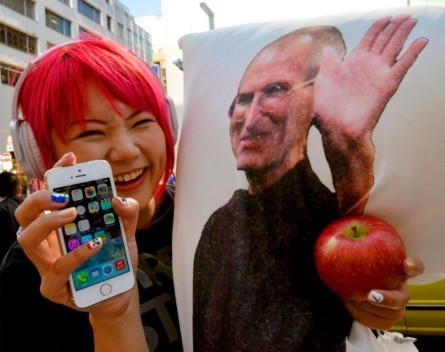 The reputation of Apple’s fans is as well known as Apple’s products. These are the people who have already started lining up outside Apple stores, just to be first to own the latest iPhone due to go on sale this Friday.

When they are not in line, they scour the Internet for articles that affirm their belief in Apple’s products, reacting swiftly to articles and comments from those that don’t share their views, principally anyone who uses a different phone.

These are amongst the most loyal customers of any brand and are often insultingly referred to as “iSheep” for their seemingly unquestioning following of Apple. In fact, in a survey earlier this year, 78% of iPhone users “couldn’t imagine having a different type of phone”.

Rival phone maker Samsung has lost no time in parodying Apple customers as iSheep. It started its campaign with a now famous 2012 video ad that highlighted the average Apple fan as shallow and largely ignorant of what they were actually buying. Apple fans waiting to buy the iPhone 5 were shown to be willing to forgo functionality because it would certainly be in next year’s version if it wasn’t in this particular model.

The irony here of course is that wherever Apple goes, Samsung is usually right there alongside, including having its own version of the unquestioning fan. Whilst Apple scores highly on the all important measure of brand retention, Samsung is actually not that far behind. 76% of Apple customers will replace their current iPhone only with another iPhone, whilst 58% of Samsung’s do the same. Samsung does better in attracting customers from other brands though, attracting 34% of all migrating customers. No other phone company comes close to the two leaders.

Setting aside the fact that although the caricature of an Apple (or Samsung) fan may have some elements of truth to it, we are still talking about a continuum of interest. Only a small number of consumers actually spend their time in lines waiting for the first iPhone or attacking Android users in comment streams.

But what makes someone identify with a brand so strongly as to show this type of behaviour at all? Not surprisingly, this question has been an area of extensive research which has covered three different aspects of the phenomenon although what has become clear is that the interaction of different factors makes determining the exact relationship of these drivers complicated to unravel.

The first driver behind why we buy a particular product is self-identity). We buy products that have an aesthetic appeal for example, because it helps build our sense of self. Apple in particular has done a very good job of creating a brand that allows their customers to identify with those who “think different”. Even though Apple is now a market leader and buying an iPhone is the equivalent of buying a PC in the days of Apple’s think different advertising campaign, there are still vestiges of this which can be associated with a person’s sense of self.

The second driver behind our relationship with a product has to do with the actual product and company itself. This is influenced by factors such as the perceived value of the product, the level of service that came with the purchase and after and the overall level of trust placed in both the product and the company.

Although not completely distinct from the previous two drivers, possibly the most important is the concept of our social-identity which helps us again define ourselves through the groups we belong to. As soon as we have defined which groups we belong to, our so-called “in-groups”, it positively influences our attitudes towards members of those groups and conversely, dictates our attitudes to groups of people outside our in-groups, the “out-groups”.

A key consequence of being in an in-group is that we ignore failures of the group and see attacks on the group as an attack on the self. In particular, these attacks damage our self-esteem. This is why arguments between Apple and Android users can become so personal, because in effect, they are.

Being part of groups is a critical aspect of being human and is part of what guarantees our survival as a species. It is not surprising then that it plays an important role in everything that we do, including the “brand groups” we may belong to.

So, before accusing someone for being an iSheep, remember that the reason you may be saying it is because you are part of your very own “Sheep” in-group.

Associate Professor David Glance is the Director of Innovation in the Faculty of Arts and Director of the UWA Centre for Software Practice, a UWA research and development centre.