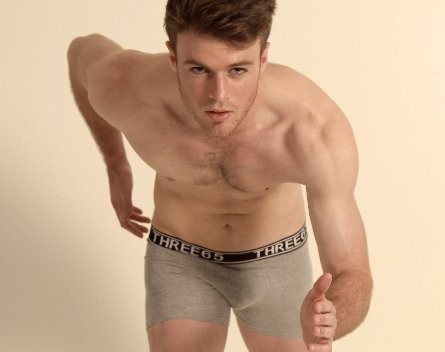 Frustration with the high prices of name brand men’s underwear prompted Will Strange to start his own subscription online store Three65 Underwear.

He says he wants to make the tedious task of buying underwear easier and simpler for men, while at the same time providing a quality, fashionable product but at a lower price point.

“Subscription underwear is the revolution the underwear market needs,” he says.

“Throwing out the old hefty price tag and replacing it with a reflection of the everyday item underwear should be.”

And he’s attracted support from some of the biggest names in Australian Rules football, with Hawthorn star Cyril Rioli joining the company as a shareholder and a host of other players taking to wearing the brand.

Strange, 24, tells StartupSmart having the brand associated with footballers who are looked up to as role models helped reinforce the brand’s perception as “cool” while remaining at a reasonable price.

He says he went to school with Rioli for a few years and when he told Rioli about his business plans, he wanted to become involved.

Three65 Underwear launched last week and Strange says it had about 2500 visitors to the site in its first week.

The business offers subscriptions for next day, free deliveries around Australia of packs of two, three, or four pairs of underwear every three months with free socks thrown in.

Strange acknowledges that cheap men’s underwear can be bought online through a wide range of websites, but says Three65 Underwear is aimed at “making a cheap brand cool”.

He launched his own business after working as a commercial real estate agent and in business development at a large construction firm.

He says he didn’t like working for other people and took time out to run his father’s country pub before looking into the concept of subscription services, which he believes many businesses will move towards in the near future.